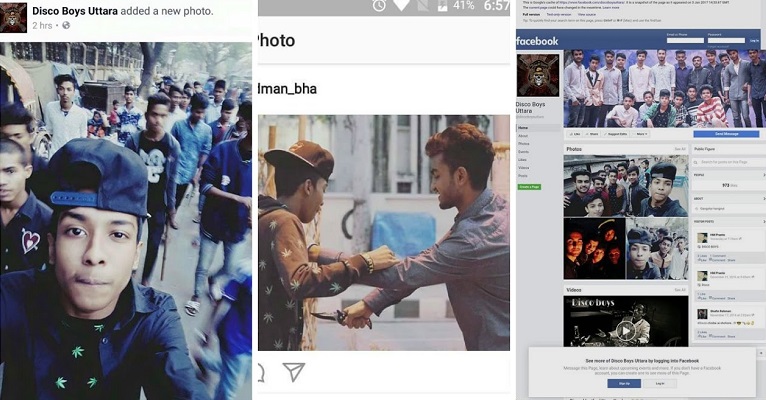 Law enforcers have taken a hard line on containing different organised teenage gangs in the capital and elsewhere across the country.

They said the teenagers are getting involved in various crimes, including murder, stalking girls, clash and extortion.

Police have arrested a number of juvenile miscreants in various neighbourhoods of Dhaka.

The latest instance of the crackdown on gangs involved the arrest of 110 youths in Hatirjheel for allegedly harassing people by making obscene remarks and gestures at pedestrians on Friday.

According to RAB, more than 400 such gang members have so far been arrested over the last three years. Of them, 174 are in the current year while 190 over the last two years.

Meanwhile, Dhaka Metropolitan Police (DMP) Commissioner Asaduzzaman Mia has promised to 'wipe out' all types of gangs in a bid to curb crimes in the capital.

"Whether it's a teen gang or something else, the word 'gang' won't exist in Dhaka. They'll all be wiped out," said the outgoing DMP chief.

A growing trend of youngsters and teenagers forming groups and committing various crimes in the capital has emerged in what is being described as a 'gang culture'. In many cases, these gangs have spawned from simple Facebook groups.

The members meet and communicate with each other through various smart phone apps. They mostly dabble in criminal activities such as the use of drugs and hijacking while some have even been involved in murders.

Police and Rapid Action Battalion (RAB) arrested many such gang members several times, but the teenagers return to recidivism after bail from court.

Law enforcers have blamed guardians for such activities of their children.

Most of the teen gang members in Dhanmondi are students of English medium schools and they are from rich families.

On March 1, a group of 25 to 30 teenagers were beating up another teenager named Sainan Hossain, a student of SFX Greenherald International School, at Dhanmondi-32.

Then, his friend and classmate Rakesh Chakma came to save him. Then, one of the gang members stabbed Rakesh, leaving him injured.

The attack was carried out as Sainan protested stalking of his female classmate by Abu Safat, one of the gang members, a few days ago.

They tease girls of schools and colleges. They often clash with other groups over establishing supremacy.

Sometimes, they drive motorcycles recklessly and honk needlessly. Elder people are afraid of the teen gangs.

In January, the gang members beat up a girl in a restaurant and spread that video on social media.

On October 4 night last year, around 20 to 30 members of ‘biker gangster’ of Khilgaon-Shahjahanpur area riding on motorbikes, gathered in front of a fast food shop at Taltola and demanded Tk50,000 from Monir Hossain, a local Bkash agent.

As he refused to pay the money, they started firing. But fortunately, no one got hurt.

The clash between Shanto and Arafat groups killed Mehedi Hasan near KC Convention Hall on August 31.

A Facebook Group called 'Bond 007' came to the fore after its members were involved in the daylight murder of Barguna youth Refat Shorif in June this year.

Teenage gang feud was behind the murder of 17-year-old Mehedi Hasan Shuvo, who was killed by his rivals in the capital's Dakkhin Khan area on August 31, said police.

Most gang members are from higher and upper middle class of the society. Some of them end up taking drugs and have been involved in various crimes like extortion, mugging, stalking and so on.

To show off their strength, these gang members -- aged between 16 and 24 -- often drive motorbikes rowdily, and clash with other group members, said police and locals.

Among them, "Shanto group" and "Arafat group" have 60 to 70 members each, who have backing from local political leaders as they often take part in political activities, according to locals.

On July 1, this year, Police arrested 10 members of the notorious Bangla Group in connection with murder.

Police have said the killing of a 16-year-old boy in Dhaka’s Rayer Bazar was the result of teenage gang-violence.

The Bangla Group has more than 50 members, he said. The teen gangs in the city’s Mohammadpur area are proving more and more violent with the days going by, say locals.

Star Bond, Jumman, Molla Rabbi, Tekka Lao, Larade, Atanka and Film Jhir Jhir are reported to be among them.

A number of clashes among the groups have already resulted in the murders of two while a number of teens suffered injuries.

On the evening of September 4, Atanka Group attacked members of Film Jhir Jhir at Chandmiya Housing Area killing Mohsin, a tenth-grader of Child Heaven International School and injuring three others.

Shapna, elder sister of Mohsin, on Friday told daily sun they were unaware whether there was any enmity between her brother and others.

About teenage gang, she said her brother had no relation with any teenage groups.

Idris Ali, father of Mohsin, was also killed a few years back. The family members suspect that the muggers killed Idris to snatch his CNG-powered auto-rickshaw.

Bhutto and Salauddin, residents of Chandmiya Housing Area, said there are many teen groups in the area. Sometimes, they get involved in fierce clashes.

A young man, whose relative was arrested by police on suspicion of killing Mohsin, told daily sun that there are teen gangs in almost each lane in Mohammadpur.

He said Molla Rabbi Group is trying to establish their supremacy in the Martyred Intellectuals Memorial area at Rayerbazar. Sometimes, the group stages showdown with more than 50 of its members in the area.

Rapid Action Battalion (RAB) has so far arrested 90 members of different gangs from the capital.

Of them, the force held 17 members of Star Bond Group from Mohammadpur on August 24 and 25, as they were preparing to attack Molla Rabbi Group.

Last year, Molla Rabbi Group killed one of the members of Star Bond Group, according to RAB sources.

He said police with the help of mosque imams and schoolteachers are dissuading the teens from being involved in the gang culture.

“We are getting positive results. Our motivation will continue,” he said.