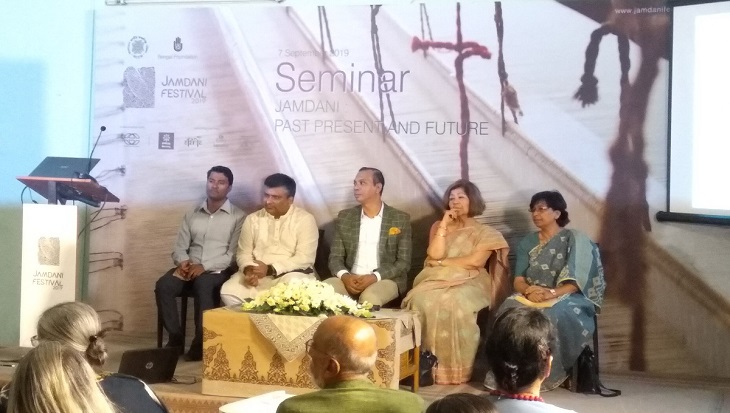 Speakers at a seminar on Saturday called upon young generation to be innovative entrepreneurs to promote the country’s Jamdani sarees, an intangible cultural heritage of Bangladesh.

They made the call at a seminar titled “Jamdani: Past, Present and Future” held at the Women Voluntary Association in Dhanmondi as part of a five-week Jamdani Festival in the capital.

Lina Rashid, General Manager of SME and Special Programmes Department of Bangladesh Bank, said that the Jamdani producers of the country are very talented but they are financially poor.

“Young generally should be innovative entrepreneurs to promote the country’s Jamdani as it’s a reorganisation in international markets. So we can earn huge currencies by selliung the items,” she said.

Ashraful Alam COO of Aarong said that there is huge number of youths in the country. “So, we can utilize them properly. Policy and financial support are needed to promote the product,” he also said.

Monminul Islam, Managing Director and CEO of IPDC Finance Ltd, said, “Once we felt proud fof Jamdani. But we could not keep it. If we try again then we can bring our prestigious period.”

Rokia Afzal Rahman, leading entrepreneur and a former adviser to caretaker government of Bangladesh, said, “We have to think about Jamdani’s markets across the world including high productivities and its future as well.”

Shafiqul Islam, Deputy Director of Bangladesh Bureau of Statistics, said that it is time to think about the sector.

The National Crafts Council of Bangladesh (NCCB) and Bengal Foundation are organizing the festival at Bengal Shilpalay in Dhanmondi-27. It is open to all every day, except Sundays, from 12pm to 8pm until October 12.

Jamdani is typically woven using a mixture of cotton and gold threads. The traditional art of weaving jamdani was declared a UNESCO Intangible Cultural Heritage of Humanity In 2013. Bangladesh received geographical indication (GI) status for Jamdani Saree in 2016.