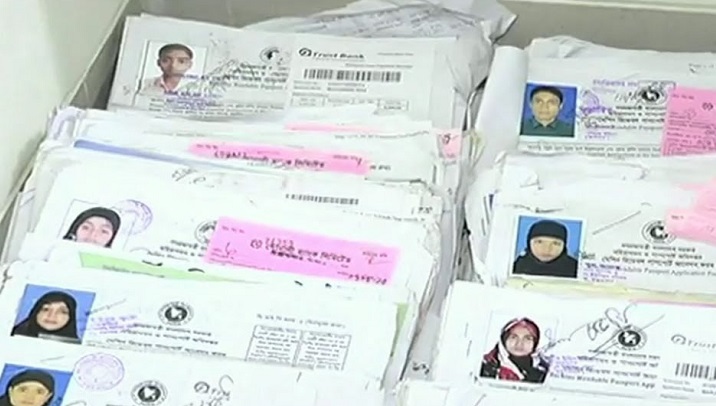 A large number of Rohingya people are obtaining Bangladeshi passports with the help of organised human-traffickers to go to other countries, detective sources said.

Seeing no hope for repatriation to their homeland in Myanmar’s Rakhine state with dignity, a large number of desperate Rohingyas is now either opting to go abroad illegally or spreading to different parts of Bangladesh, creating a fresh problem for the country.

Police said it is difficult to prevent this as the traffickers are helping the Rohingya leave Bangladesh.

On February 14, Rapid Action Battalion (RAB) and police in separate drives detained 43 Rohingyas and arrested two human traffickers in Cox’s Bazar as they were attempting to travel to Malaysia.

On May 3, immigration police arrested three Rohingya youths and two alleged traffickers from the check post area of Benapole land port while they were going to India.

Bangladeshi passports were also seized from their possession. The Rohingya are Sarwar, Marjan and Qaium, who used to live in a camp in Cox’s Bazar.

Brokers Zaman Khan and Rafiqul Islam were trafficking them to India in exchange of huge amount after tempting them with the assurance of good jobs in India,” said Abul Bashar, officer in charge of Benapole Check Post Immigration.

According to local police and NGO officials, a human trafficking racket is encouraging the Rohingya, mainly women, to take the risk of going to Malaysia and Indonesia by sea, or flee the camps in Cox’s Bazar to collect Bangladeshi passports with fake documents.

This racket is providing them with false documents and helping them trick the authorities to get their hands on Bangladeshi passports.

The traffickers are also helping the Rohingya escape their refugee camps and contact their relatives living in different Muslim countries.

More than 1.1 million Rohingyas, who have fled brutal persecution in Myanmar over the past few years, are currently sheltered in a number of camps at Teknaf and Ukhiya of Cox’s Bazar.

Abu Nayeem Nasim, an official at the Cox’s Bazar regional passport office, said they have already identified some 300 applications submitted by Rohingyas.

He said they are now very careful in issuing passports so that Rohingyas cannot get them with false documents.

Local police, Border Guard Bangladesh (BGB) and coastguards have intensified their monitoring and launched special drives to prevent the Rohingyas from escaping the camps.

Law enforcement officials set up eight check posts at Ukhiya and Teknaf, while coastguards took position at different points of the Naf River and the Bay of Bengal.

In their separate drives, BGB, coastguards and Police detained around 600 Rohingyas over the last one-and-a-half-month, foiling their bid to flee to Malaysia through the sea.