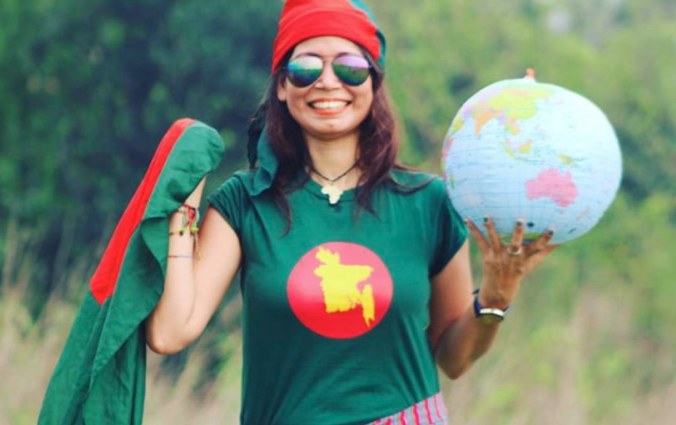 Najmun Nahar, a Bangladeshi globetrotter, has been honoured with the ‘Miss Earth Queen Award’ at the 33rd Convention of the Federation of Bangladeshi Associations in North America (FOBANA) in New York.

Thousands of Bangladeshis from all over the world congratulated Najmun Nahar at the Nassau Coliseum in Long Island, during the program held on September 1 for her mind-blowing success in realizing a dream to win the world by travelling.

Najmun was awarded for her outstanding historic travel around the world with the red and green national flag of Bangladesh.

She touched a milestone of traveling 130 countries across the world and has a strong conviction and an exceptional dream to travel to every single nation of the world with the national symbol of Bangladesh.

Najmun Nahar on the second day of convention delivered an inspirational speech and presentation at ‘Win the World’ programme organized by ‘New York Students Association’.

A documentary on the life and adventure of Najmun was screened in the programmer while she received ‘Globe Award’ from the organization.

The Bangladeshi lady is not only an inspiration to Bangladeshi youths but the youths of the whole world to represent their nation with pride.

Lastly, Najmun Visited Canada as the 130th country and hoisted the red and green flag of Bangladesh at Niagara Falls.

Najmun drew the attention of the world media through her adventurous journey across the world and received several awards from different countries including her motherland.

She received ‘Icon of Youth’ award and was honored by Zambian government with ‘Flag Girl’ designation.

About her hobby, Najmun said, “Many people collect money to buy car, home and valuable assets but I spend all of my money to travel the world.”

“During my travel, I represent Bangladesh in different countries of the world,” she added.

Najmun Nahar was born to Mohammad Amin in Laxmipur on December 12, 1979.
She is the youngest among eight brothers and sisters.

Najmun Nahar completed her graduation and post-graduation from Rajshahi University on Public Administration in 2004. She never missed any travel scope since while studying at Lund University in Sweden. She completed her study on ‘Asian Studies’ there in 2009. She also grabbed a degree on ‘Human Rights and Asia’ from Seoul National University in South Korea in 2015.

She passed her HSC in 1996 from Laxmipur Government College, SSC in 1994 from Dalan Bazar NK High School.

Najmun Nahar is a travel icon for the world’s community of travellers.