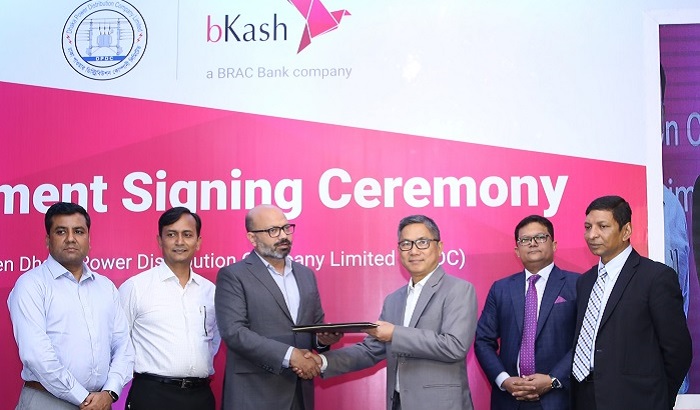 Customers of Dhaka Power Distributor Company (DPDC) will be able to pay electricity bill through bKash, from now on.

bKash will facilitate 1.2 million prepaid and postpaid subscribers of DPDC, the largest power distributor company of Dhaka, to pay their electricity bills easily from anywhere 24/7. Customers can also check the bill amount from their bKash accounts.

Currently, around 27.5 million customers of the large three power distributor companies are able to pay electricity bills through bKash.

The banking partner for DPDC bill payment is BRAC Bank, one of the leading private commercial banks of the country.

The agreement has been signed today at a hotel in the capital among DPDC, bKash and BRAC Bank.

To pay the bill through bKash app, customers need to select DPDC from Pay Bill option, then provide the DPDC customer number, month and year to see the bill amount. To pay the bill, they can just input the PIN number and complete the bill payment process.

Customers can also dial USSD code *247# to pay DPDC bill. After dialing, they need to select ‘5’ from the bKash menu for ‘pay bill’ service and follow some interactive steps to complete the transaction. After successful payment, the customer will get SMS notification from bKash.

There will be no service charge for customers during the first six months after this launch of DPDC bill payment.

Currently, customers of Palli Bidyut, DESCO, NESCO and many other utility services can pay bills through bKash. The number of customers is rising rapidly as the bill payment process through bKash is easier and hassle-free; people don’t need to go to bank or anywhere outside their homes to pay bills.