Female workers are on rise in EPZs 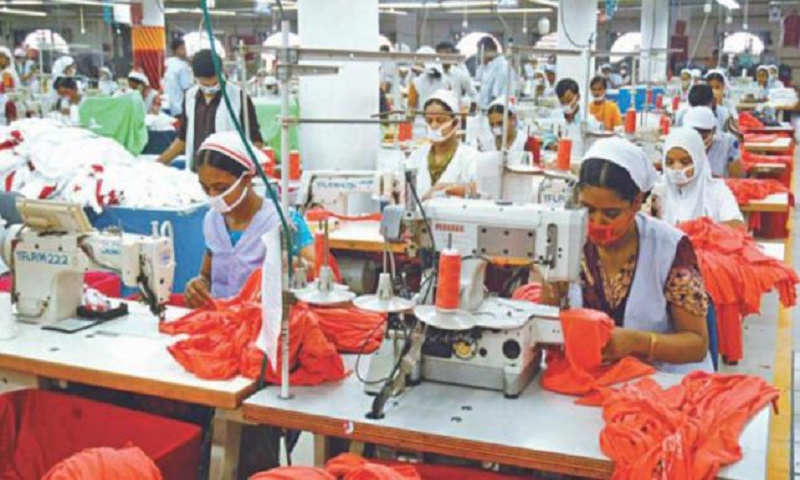 The number of women workers is increasing in the industries of Export Processing Zones (EPZs) as employers find women workers are suitable for their industries because of their dedication and sincerity.

Many female workers are also holding leading positions in many renowned factories in the country’s eight industrial enclaves.

Like many other female workers in the Softex Sweater Industries (Private) Limited in the Dhaka EPZ, Shahana Sultana joined 14 years ago as a junior operator and she is holding the position of supervisor . Her dedication and hard working helped her to reach the position in the sweater industry that mainly exports products to European markets, reports BSS.

“Being satisfied with my work, company promoted me as supervisor. Now, my salary is enough for supporting my family,” said Shahna Sultana whose three daughters are also working in Dhaka EPZ.

She informed that two of her daughters got married and they are now working in the Dhaka EPZ for contributing their respective families. Her younger daughter has passed intermediate from BEPZA Public School and College and then admitted to Eden College. She is appearing masters’ examination and studying ICMA as well.

“My children have been educated by the earning of my job. Now, I am very well,” she added.

Similarly, Panna Yeasmin, Senior Manager (Production) of the Lhotse (BD) Limited in Karnaphuli EPZ, said her family was in deep financial crisis and they used to live in extreme trouble. “Without appearing SSC examination, I joined Lhotse (BD) Limited, I had started my job as a helper, then promoted to supervisor,” she added.

Now she is working as a senior manager and her family became solvent due to this job. Her younger sister is studying; elder brother went to abroad with the help of her earning. By this time, she has bought a tiny land and a shop from her savings.

“Nobody knew me before. Now everyone knows me, honours me. Job in the EPZ is the key behind my all achievements,” Panna said with a happy feeling.

Like Shahana Sultana and Panna Yeasmin, a good numbers of female workers are contributing the economic activities in the industries of the EPZs as well as changing their lifestyle.

Talking to BSS, Bangladesh Export Processing Zones Authority (BEPZA) General Manager Nazma Binte Alamgir said around 66 percent of the total workers in the country’s eight EPZs are female and they also played an effective role to cross the investment, export and employment targets of BEPZA for the fiscal year 2018-19 (FY19).

“BEPZA has set a milestone in women empowerment. A large number of female workers are working in the EPZs. Of the total 5,16,588 workers in EPZs, around 66 percent are women,” she added.

She said that every year an increasing number of women are joining the productive workforce of EPZs. “Women from the backward areas are gradually developing their positions in the EPZs as team leaders,” she added.

In a word, Nazma Binte Alamgir said, women working in the EPZs are now in the mainstream of development.

For empowering and employing the unemployed women of the northern part of Bangladesh, she said, a project was initiated with the help of World Bank called ‘Northern Areas Reduction of Poverty Initiative Project (NARI)’.

The aim of this project was to facilitate access to employment opportunities in the garment sector for poor and vulnerable women from backward areas by providing information, technical and life skill training, transitional housing and other supports to adjust to urban life and formal sector employment, she mentioned.

Nazma also informed that a total of 10,800 women trained themselves to get employment opportunities in the EPZ enterprises.

A total of eight EPZs are being operated across the country. Those are Chittagong EPZ, Dhaka EPZ, Mongla EPZ, Ishwardi EPZ, Comilla EPZ, Uttara EPZ, Adamjee EPZ and Karnaphuli EPZ.

BEPZA, as the competent authority, performs inspection and supervision of the compliances of the enterprises related to social and environmental issues and safety and security at workplaces aiming to maintain harmonious labour-management and industrial relations in EPZs.

The primary objective of an EPZ is to provide special areas where potential investors would find a congenial investment climate. BEPZA is working to strengthen the economic-base of Bangladesh through industrialisation, promotion of investment, increasing export and generation of employment in the EPZs.