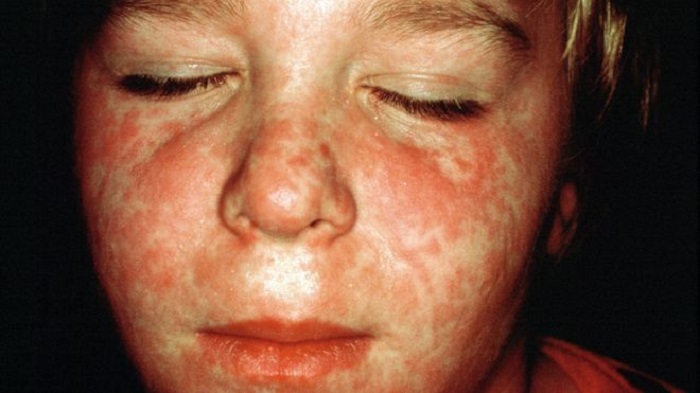 A total of 1,051 people were affected between 1 January and 5 September, 2019, the ministry of health said.

Measles is a highly contagious and potentially fatal illness that causes coughing, rashes and fever.

Although effective and safe vaccination is available, some developed countries have seen a measles resurgence in past years.

Worldwide, the number of cases has quadrupled in the first three months of 2019 compared with the same time last year, according to the World Health Organization (WHO).

The New Zealand outbreak is largely concentrated around the country's biggest city Auckland, with 877 of the confirmed cases seen there.

The Health Ministry has issued a statement calling for everyone aged 12 months to 50 years old to get vaccinated if they have not been already.

"This was entirely predictable and preventable, so it is very disappointing for us."

Authorities are urging anyone who feels sick to "stay away from work, school or public places, to prevent putting other people at risk".

The ministry has also put out a travel advice to get vaccinated at least two weeks before visiting Auckland.

The US Center for Disease Control and Prevention has issued advice to get measles vaccination before visiting New Zealand.

Global numbers on the rise

A viral illness spread by coughing and sneezing, measles is one of the world's most contagious diseases.

Although most people who catch it will recover, it can lead to life-threatening complications.

Before the introduction of a vaccine in 1963 and widespread vaccination, "major epidemics occurred approximately every 2-3 years and measles caused an estimated 2.6 million deaths each year", are according to the WHO.

Numbers of measles cases were steadily declining worldwide until 2016, when the illness saw resurgence.

Earlier this year, the WHO said four European countries, including the UK, were no longer seen as measles-free.

The rise in developed nations is in part due to some parents shunning the vaccines for philosophical or religious reasons, or concerns, debunked by medical science, that vaccines are linked to autism