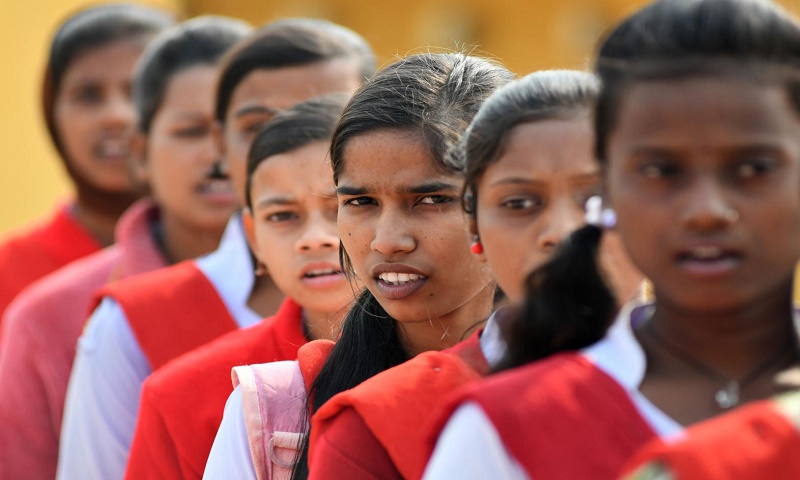 In countries with prevalence of early marriage families are likely to marry off daughters to relieve financial burdens.

Child marriage robs girls of their childhood and threatens their lives and health. Girls who marry before 18 are more likely to experience domestic violence and less likely to remain in school. Because child marriage impacts a girl’s health, future of families, it imposes substantial economic costs at the national level, too, with major implications for development and prosperity, reports BSS.

Fifteen-year-old Tamanna Islam is one the girls saved from early marriage. A student of class nine Tamanna used to live with her parents at Digha village of Sharsha upazila under Jashore district.

As her father Md Quaium had to face hardships in maintaining his family, he opted for getting her daughter Tamanna married off early.

One day he got a proposal of his daughter’s marriage through a relative. After getting proposal, he finalized the date without taking any consent from Tamanna. As ill luck would have it Tamanna was scheduled to get married off with 34-year Redwan on February 16 last.

Being informed, Sharsha Thana police came to Tamanna’s house on that day to check and foiled the early marriage. Realizing that the marriage was not a solution to poverty, the family agreed to have it annulled. She is now back at school.

In another incident, sixteen-year-old Jashoda Rani Dey used to live at Jhikargacha upazila of Jashore district.

She is elder among her three brothers and three sisters. Her father Bikash Dey owned a grocery shop in the village. Bikash, who was experiencing hardships in running his eight-member family, was in the grip of tension concerning the marriage of his daughters.

At one stage, he got a proposal for the wedding of his elder daughter Jashoda who was a student of class X at that time.

But, Jashoda and her mother Rani Dey did not agree with the marriage. But Bikash forcibly fixed the date of the wedding of her daughter without taking any consent from his wife or daughter.

Being informed, concerned Upazila Nirbahi Officer (UNO) stopped the marriage with the help of local police.

According to a survey, conducted by Population Science Department of Dhaka University in 2016, the rate of early marriage is the highest in Rangpur division.

Kurigram district topped the list in Rangpur division, where the rate of early marriage is 91 percent, followed by Nilphamari with 90 percent.

According to a study of Washington-based think tank ‘International Food Policy Research Institute (IFPRI)’ child marriage in Bangladesh has declined to 43 percent from 62.3 percent in last couple of years.

The government has already taken massive initiatives to eliminate the early marriage from the division. Mobile technology has been introduced in Rangpur division to stop early marriage.

In the beginning of the year, the government launched a pilot project in Kurigram which was inaugurated by the then state minister for women and children affairs Meher Afroj Chumki.

Later, four more districts have been brought under the pilot project with the help of non-government organizations (NGOs).

Human right activist Advocate Monowara Haque said if the girls stand against child marriage, one day Bangladesh will be freed from the social menace.

She said the people of those regions are now very much conscious about early marriage due to the introduction of mobile apps.

She said the Jatiya Sangsad has passed the “Child Marriage Restraint Bill, 2017” adopting the bill by voice votes.

According to the law, the minimum age for the marriage of females is 18 and for males is 21, other than the ‘exceptions in special circumstances’.

Child marriage is a violation of children’s rights, putting girls at greater risk of dropping out of school, domestic violence and potential life-threatening health consequences of early pregnancy.

When they are empowered to reach their potential, women and girls can be powerful agents of positive change.