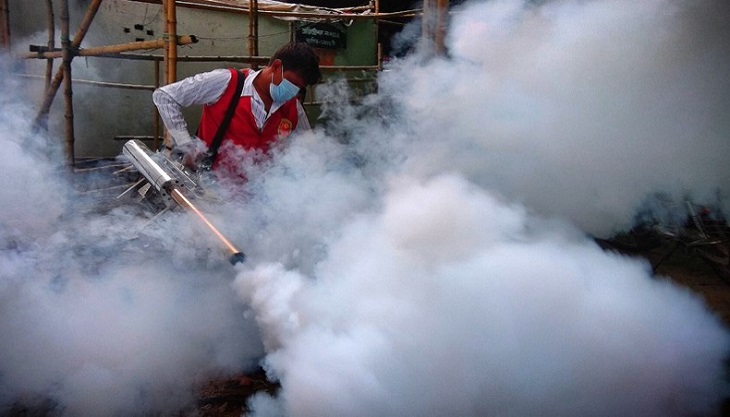 A large portion of the mosquito repellent aerosol bottles, purchased by Dhaka South City Corporation (DSCC) for distribution to households and institutions, remains stockpiled in the storerooms of the city corporation and could be wasted unless used on time.

Though the mosquito repellants are in high demand amid the dengue outbreak, DSCC authorities did not distribute a larger portion of the repellants.

DSCC officials said though some spray bottles were distributed in some wards, they did not get the nod from the Mayor and other high officials to resume the distribution of the repellants.

Though the list of the households and institutions were prepared long ago and councillors of the wards kept pursuing the chief revenue officer on the issue, the distribution is yet to be completed.

The repellants will become ineffective unless used on time.  During recent visits to the storerooms of DSCC, several hundred cartons of aerosol spray cans were found stockpiled in the storerooms.

DSCC purchased aerosol spray worth Tk 4 crore from ACI Ltd to distribute among school, colleges, madarasa, university and holding taxpayers. Chief revenue officer of DSCC was given the responsibility of leading the distribution process.DSCC chief revenue officer and the assigned officer to distribute the mosquito repellants, Md Yousuf Ali Sarder said, “The aerosol spray bottles are distributed from zones, I don’ know how many aerosol bottles were distributed and when the remaining bottles will be distributed. The Mayor and Chief Executive Officer can give more details about this issue.”

Regarding aerosol spray distribution in newly formed wards, he said, “The mayor, CEO and other high ups instructed to distribute the mosquito repellants.”

Asked about the quantity of aerosol spray procured by DSCC, DSCC Chief Purchase and Store Officer Md Nuruzaman declined to give any details but suggested this correspondent to contact the DSCC Public Relations Officer.

Contacted, DSCC Public Relations Officer Uttam Kumar Roy said, “Have a look at the newspapers, they published the detail information. I don’t have information in this regard right now.”

DSCC chief executive officer of Mostafizur Rahman, however, said sufficient number of aerosol spray cans have been distributed in schools, colleges and other educational institutions and they will continue to distribute the mosquito repellants. We have published newspaper advertisements twice, inviting taxpayers to collect their spray cans from DSCC offices.”