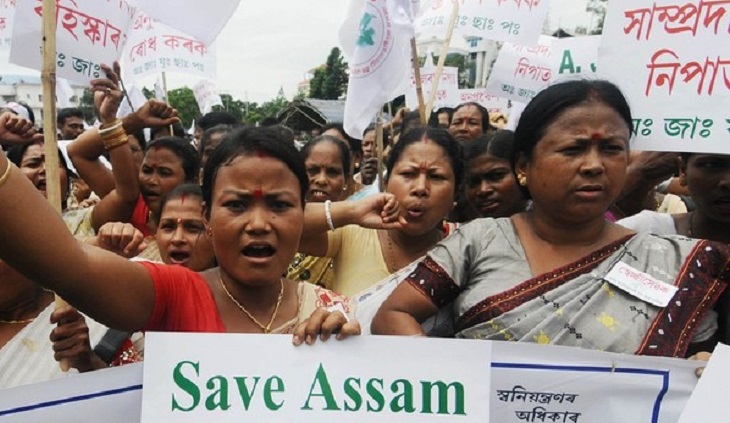 A humanitarian crisis brewing in Assam and we need to talk about it. There are 1.9 million people in Assam who will become effectively stateless after the recent update of the National Registry of Citizens (NRC) in Assam. Nearly all of the 1.9 million people left out of the NRC are Bengalis, both Hindus and Muslims.

The NRC was first prepared in Assam in 1951. In the 1980s, ethnic Assamese students started violent protests calling for a new NRC list. Thousands of Bengalis were killed. The region has seen sporadic outbreaks of violence against Bengalis and attempts to repress their culture. The Bengali people had to fight for the Bengali language and had their own language movement similar to ours. The government of India was forced to sign an agreement with the agitating students that included a provision for updating the NRC. Only those people who could prove that they were in Assam before 24 March 1971 would be allowed to be in the NRC. The date was not random; it was one day before the start of Bangladesh Liberation War and the Independence of Bangladesh.

The process of the new NRC started after the Supreme Court of India gave the go ahead in 2015. The initial draft left out 4 million people. A second draft added 0.1 million to the excluded list. The final NRC was released on 31 August 2019. There were 1.9 million people left out, meaning that “enough” evidence was not found to prove that they are citizens of India. They were victims of an odd process that asks residents to prove that they are citizens of India. This places an undue burden on them; most of whom are poor and/or illiterate. They rarely have any official records such as birth certificates, especially those of their grandparents, and the record they had were often not accepted.

The process went with the rhetoric of BJP which can often be anti-Muslim, Hindu supremacist, and anti-Bangladeshi. Amit Shah, the BJP home minister called Bangladeshi migrants “termites”. The Indian government does not and will not use similar terms to describe illegal Indian immigrants in the United States or the United Kingdom. The Indian government expressed concern after a number of Indians in the United States were arrested in a fake university sting operation. Also by illegal immigrants, they do not mean Hindus, for whom they offer citizenships, but Muslims.

Some of the Hindu Bengalis in Assam have expressed to the New York Times that they believe that the Hindus who were left out of the NRC will not be deported as the Central government has assured safety to the Hindus. The Bengali Muslim community of Assam does not feel the same and does not enjoy the same assurances. There has been widespread propaganda in Assam against Bengali Muslims and demonization of the community.

Let’s take a look at the Bengali population of the region and the historic context of their movement. During the British Raj, Bengal had a large population who were skilled in agriculture and trade. The British government encouraged the Bengalis to move East to Assam, Tripura, Arakan, and other regions so that they could establish a plantation economy and build settlements. The idea behind it was to encourage economic productivity and increase the tax revenue generated from the region.

As a result, certain areas of the region became Bengali majority. In 1947, before the partition, the Sylhet referendum was held and Sylhet District of Assam voted to join East Bengal and the future state of Pakistan. Karimganj, which was a Muslim majority part of Sylhet, was given to India against the expressed wishes of the residents. Thus this Muslim majority region went to India.

This was not an uncommon thing, as East Bengal ended up with the Chittagong Hill Tracts and Khulna District which were not Muslim majority. India received Murshidabad District which was Bengali Muslim majority and seat of the Nawab of Bengal, a place of particular historic importance to Bengalis. The partition was neither accurate nor perfect. Many places had flags of India or Pakistan up before they realised there were placed in the other country.

The Muslim population grew in the region and the Assamese and Bodo tribes feared losing their majority status. They claimed the Muslim population was increasing due to migration of Bangladeshis. The local Congress Party in Assam had also complained of the growth of Bengali population irrespective of religion. Their view on this can be challenged. The fertility rate of India is 2.3, as is of Assam, while that of Bangladesh is 2.1 and Muslims in India have a slightly higher rate of fertility than the national average of India but the gap has narrowed significantly in recent times. There was also internal migration in India, where the Bengali population exceed 97 million and of whom, 36 million are Bengali Muslims. This can be used to explain the growth of the population. The Bengali population of Andaman and Nicober Islands has grown significantly, becoming the most spoken language in the territory, since the independence of India. Are these people also Bangladeshi migrants?

The Government of India tried to pass a law that would have offered citizenships to Hindus, Sikhs, Buddhists, Parsees, Jains, and Christians. Notably Muslims were left out. The bill was shelved as it faced resistance from Assam’s politicians. The Assamese want an ethno state in a plural, diverse, and democratic country, which is frankly, impossible. The government of India cannot restrict internal migration and as shown by its actions in Kashmir, it does not want to. A unified and united India should not have restrictions that discourage the movement of its citizens within its border based on ethnicity or religion.

As of now, the future of 1.9 million residents of Assam remains unclear, India is building detentions centres but how long can they hold them? Will the 1.9 million people become permanent detainees? They do have the option to appeal to an immigration court and the appeal process can go all the way to the Supreme Court, in theory. Many of these people don’t have the financial resources or the knowledge to pursue all their options as such it remains to be seen how many of them pursue their cases all the way to the Supreme Court. This process will increase the pressure on the already strained legal system of India.

The BJP did not expect so many Bengali Hindus to be caught in the process and are unsure what to do next. This was a way for them to shift the votes in their favour in Assam and generate support through xenophobia. Bangladesh has no reason to take them as there isn’t any evidence that they are Bangladeshis. From experience, Bangladesh knows that once you take in a stateless population it can be difficult to send them back or settle them elsewhere. There are a million Rohingya refugees from Myanmar in Bangladesh and there is no sign that they are going back to Myanmar anytime soon.

Bangladesh is a poor country and cannot support an additional 1.9 million people. The Indian government has decided that there is not enough evidence to prove that these people are Indians but there is certainly not enough evidence to prove that these people are Bangladeshis. The Indian government keeps claiming it is an internal issue, despite the end date, for evidence of residency, is the independence of Bangladesh and the fact that Indian national and local leaders keep calling them illegal Bangladeshis. The government of Bangladesh should reciprocate that feeling and call it an internal matter of India and refuse to accept any of the 1.9 million people, who have been left out of the NRC. We should also trust India, being a friendly neighbouring country with which we have great relations, to not force these people on us.

The future looks grim for the 1.9 million, which includes entire families, and they risk becoming future Rohingyas of India. Stateless and homeless, people of nowhere whose fates are decided by people living thousands of miles away.

The writer is a graduate student of