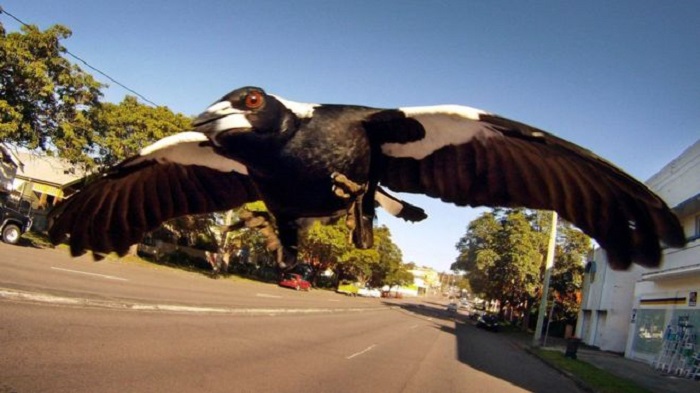 A notorious magpie whose habit of swooping on passers-by in Sydney led to dozens of complaints was shot dead, prompting an outcry from magpie lovers.

The local council defended shooting the "particularly aggressive" bird, saying the decision was "not taken lightly".

The magpie had attacked people in the Hills Shire area of the city, sending some to hospital, local media reported.

The Australian magpie is a different species to the European bird with which it shares its name.

During mating season, the Australian magpie can become aggressive and attack humans crossing its territory. But the species is protected by law and can only be dealt with by local authorities.

The Hills Shire magpie was shot by the council after more than 40 complaints, the council said. One resident suffered a heart attack following an attack, Australia's national broadcaster ABC reported.

A council spokesperson told ABC this particular bird "was very aggressive and uncharacteristically territorial" and tried to attack people's faces - going so far as to deliberately try to swoop underneath cyclists' helmets.

It was nicknamed the "Windsor Road Monster" after carrying out such attacks over several years.

Magpie Alert, a website that lets users log swooping attacks, had at least a dozen reported attacks on the stretch of road so far this year.

"Same Magpie - swooped three times and hit right side of head and scratched my face," one user wrote. "He started by coming in at eyeball level - straight on," another reported. "I have never known a more aggressive magpie."

After unsuccessfully trying to capture and relocate the rogue passerine, the council obtained permission from the National Parks and Wildlife Service for the bird to be shot by a professional.

The council said the shooting was a last resort - but many magpie enthusiasts and animal lovers were unhappy with the decision.

Wildlife magazine Australian Geographic quoted bird expert Darryl Jones as saying that magpies were "quite possibly the easiest birds to catch" and that he was "not very impressed" with the shooting of the troublesome bird.

An online Facebook group for fans of the Australian bird was flooded with those asking why cyclists could not avoid the area for six weeks, wear extra protection, or simply suffer the bird which was "protecting its family". Many said they would complain to the council.

Emma Hurst, a local MP from the Animal Justice party, said "This mother was simply protecting her young. Now her babies will likely starve to death or be hunted by other animals."

"What a sickening and brutal knee-jerk reaction from Council," she said.

Magpies are widely loved in Australia, despite their propensity to attack people. In a radio programme on the species, British naturalist Sir David Attenborough described a "less violent side to this avian hoodlum".

"Australian magpies have melodious voices, which can range over four octaves in a chorus of squeaks, yodels, and whistles," he said.

Groups of the birds are known to carol together, in a manner described by the New Zealand poet Denis Glover as "quardle oodle ardle wardle doodle".