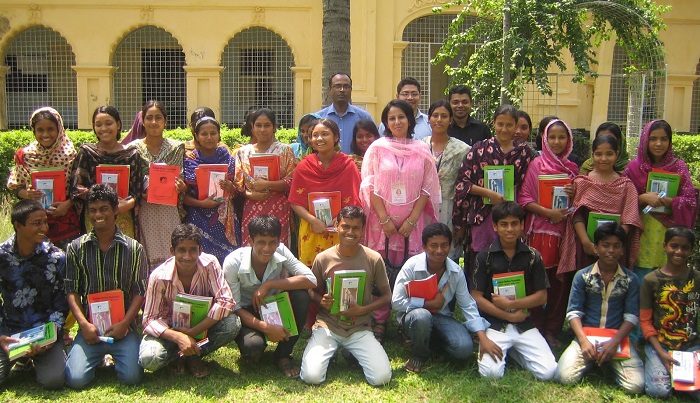 Children are the future of the country and it is impossible to take the country forward without giving adequate opportunities to flourish them.

But all the children are not lucky to get the chance to secure a better future for them due to their poverty, absence of parents, physical and mental barriers.

For the children like these, the government through the Department of Social Services (DSS) is running many Sarkari Shishu Paribar (State Children Home) across the country.

There are innumerable numbers of children living in a deplorable condition in the country. They are orphans, destitute, disabled and very poor, who are living below the poverty line.

According to different government sources, from the nineteen fifties some orphans were reared up, educated and rehabilitated by the government through establishing the state orphanages and were run by the Primary Education Directorate.

Later, the orphanages have been transferred to the DSS. Other than this programme, the DSS has established many organisations for education, training and rehabilitation of the destitute, street children and abandoned baby.

Since the inception of the DSS in 1961, the responsibility of running the state orphanages had been shifted to them.

The main objective behind the management of the Sarkari Shishu Paribar is to create an environment for children to grow as normal citizens of the country. The specific objectives of Sarkari Shishu Paribar are to take care, protect, maintain and to provide food, education, training, medicare, recreational facilities and also to rehabilitate the orphans.

Rowshan Ara is a MA student of Khulna University. She was raised at a Sarkari Shishu Paribar in Khulna and wants to give all the credit to that institution for coming this far in spite of being an orphan.

“When I get admitted to the Sarkari Shishu Paribar, I was only five. My father died when I was three. I was admitted at Shishu Paribar in 2001. I was somewhat meritorious but my teachers helped me a lot. I came first in the final exam in class two, and the academic results in the following years were also satisfactory,” she told ‘daily sun’.

Rowshan said the love and care showed by the teachers at Sarkari Shishu Paribar were the driving force behind her success, adding, they guided children like her as their own.

“I was able to learn tailoring, computer and beauty parlour courses at the Paribar. I took admission in Khulna University after passing HSC in 2013. I want to become a BCS cadre in future,” said the confident Rowshan.

Tanzina Akter was raised in Bagerhat Sarkari Shishu Paribar and now working as a social service worker at Dakop Upazila Parishad in Khulna.

“I can’t remember faces of my parents as I was admitted at Sarkari Shishu Paribar when I was too young. Without the services provided by the Paribar, I don’t think I would have been able to come this far,” Tanzina said.

According to government sources, there are 85 Sarkari Shishu Paribars under the DSS all over the country with a capacity of 10,300 orphans. Among which 43 institutions are earmarked for boys, 41 for girls and 1 for both sexes.

For physical and mental growth of the inmates of orphanages, facilities including food and lodging, shelter and maintenance, general education, religious and moral teaching, sports and recreation, medicare, vocational training and rehabilitation are provided at the paribar.

A total number of 51,342 orphans have been rehabilitated through this programme till to date. These orphanages would be modernized with medical centre and computer training facilities.