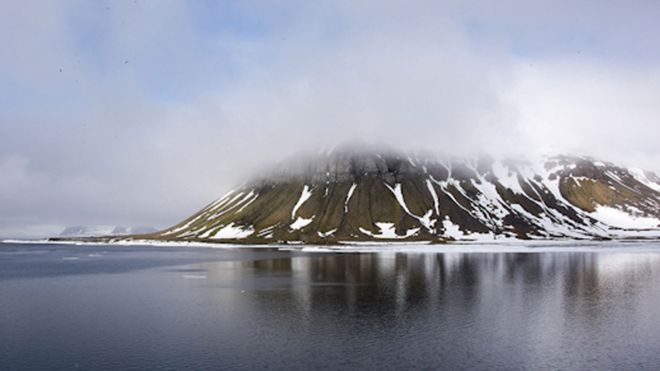 A Russian Arctic expedition has mapped five small islands in the far north, discovered by a student analysing a glacier's retreat in satellite photos.

Before Marina Migunova's discovery in 2016 the islands were hidden under the Nansen Glacier, also known as Vylka, in the Novaya Zemlya archipelago.

Her discovery was part of her final coursework at the Admiral Makarov State Maritime Academy in St Petersburg.

Maps are being updated as global warming melts ice across the Arctic.

They are in Vize Bay, on the northeastern coast of Novaya Zemlya. During the Cold War the Soviet military tested hydrogen bombs in that remote region, including Tsar Bomba, the biggest ever detonated.

The retreat of Arctic ice is opening up navigation in the region for longer periods, and Russia has significant commercial and military interests in the far north.

Ms Migunova received a special honorary diploma from the Russian Hydrographical Society for her discovery. She is now a naval oceanographical engineer in the Russian Northern Fleet.

The academy says it is making intensive use of satellite photos to record changes to coastal regions in the Arctic archipelagos of Novaya Zemlya and Franz Josef Land.

Also known by the Russian initials GUMRF, the academy says its specialists found more than 30 new islands, capes and bays there in 2015-2018.