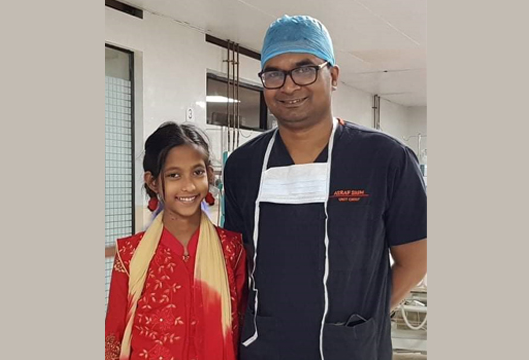 The 12-year-old girl Nupur returned home after a successful minimally invasive cardiac surgery at the National Institute of Cardiovascular Diseases (NICVD), the first of its kind at any government hospital.

Hailing from Sujanagar upazila in Pabna, Nupur was suffering from Atrial Septal Defect (ASD) — a hole in the wall between the two upper chambers of heart

A team of 10 doctors headed by Dr Ashraful Hoque Sium conducted her operation at the NICVD on August 25.

They carried out the surgery of Nupur with full anesthesia which took two and a half hours and the cost of the operation was only Taka 5,000.

After the great success, Dr Sium, while expressing his feelings,  said, “I am speechless !!! I used to dream to do something a big for the people and I love most to implement that…with the support of the honourable Prime Minister, I’ve been able today to materialise such a dream. I’m very happy and thankful to all.”

In minimally invasive cardiac operation, surgeons perform heart surgery through small incisions in the chest as an alternative to open-heart surgery. Surgeons do not cut through the breastbone, rather they operate between the ribs, which may result in less pain and a quicker recovery for many people.

It allows surgeons to use techniques that limit the size and number of cuts, or incisions that they need to make. It is typically considered safer and quicker than a traditional heart surgery.

Before the NICVD, only National Heart Foundation of Bangladesh (NHFB), a private hospital in the city’s Mirpur, conducted such surgeries and they charged Tk 2.5 lakh to Tk 3 lakh for each, said Dr Sium, an assistant professor of the NICVD.

Dr Sium said the NICVD would operate this kind of surgery regularly as the essential equipment are available at the hospital. “We’ll also train up other surgeons in this regard,” he said..

He extended his sincere thanks to Prime Minister Sheikh Hasina for allocating special budget to the NICVD for importing the instruments.

About the initiative, Dr Sium said they had planned to introduce the surgery at the NICVD about one and a half years ago.

“There were some issues, including funding and approval from the higher authorities, which needed to be addressed. The prime minister’s directives in this regard made things easier for us. She encouraged us to go-ahead and ensured all kinds of support,” he said.

About the risks involved and success rate of a minimally invasive surgery, the physician said, “It’s a complicated surgery as it’s conducted through several tiny cuts in the patient’s skin. So surgeons need to be very careful about avoiding injuries. However, this surgery makes patients feel more comfortable during their recovery period.”

Dr Sium said a minimally invasive surgery is an advanced form of an open heart surgery.

“It is being practiced in many countries across the world for the last 3/4  years. We have successfully carried out such a surgery of Nupur at the NICVD at a cost of only Tk 5,000,” he said.

Dr Sium said they advised Nupur to come to the hospital again for follow-up checkup.