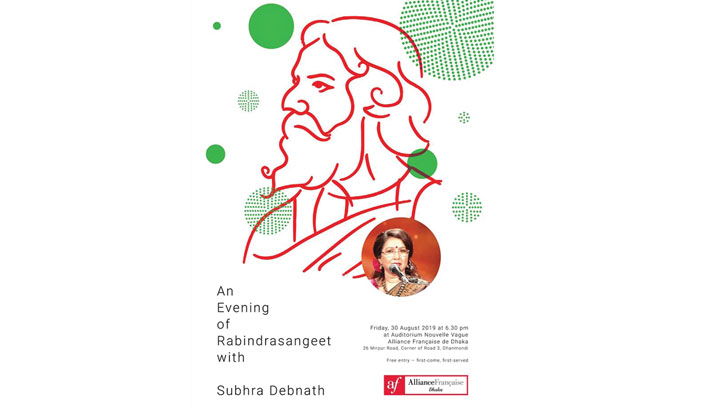 A musical programme titled ‘An Evening of Rabindra Sangeet’ will be held at   Auditorium Nouvelle Vague of Alliance Française de Dhaka tomorrow at 06:30pm.

Acclaimed Tagore singer Subhra Debnath will perform on the occasion. The artiste will render popular songs from Rabindranath Tagore at the event.

Subhra Debnath is a pure Tagore singer. Since Subhra Debnath’s early childhood she has been walking the path of music, starting with receiving lessons from the distinguished artiste Dilip Das and later from Murad Ali, Lili Islam, Sadi Mohammad and Rezwana Choudhury Bannya.

Talking about her works she said, “Despite most of the audio companies do not treat Rabindra Sangeet albums in the way they treat other pop albums, I hold a solid confidence that the trend of Rabindra Sangeet will see a rise.”

In addition to being a professional teacher, Debnath regularly performs in local and international shows. She has received awards and accolades from Egypt, Nepal and Turkey among others. “Music is my life and I will cherish Rabindra Sangeet as long as I live!” concludes Debnath.