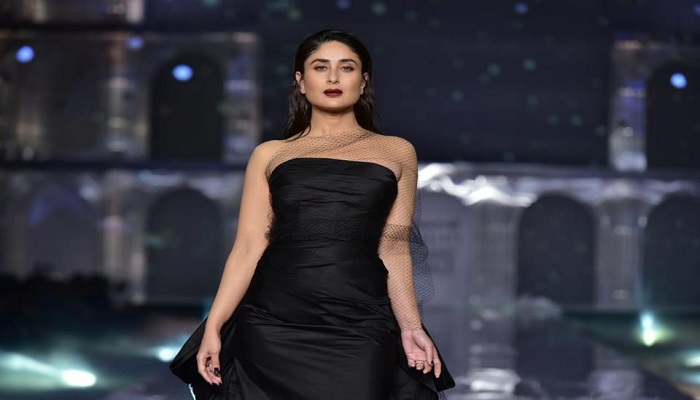 Actor Kareena Kapoor brought down the curtains on the Lakme Fashion Week by walking the red carpet for designer Gauri and Nainika on Sunday. The actor took to the ramp in a black gown with fishnet details.

Looking stunning with her shower-ready hair combed back and berry-red lips adding to her look, Kareena wore no jewellery other than her wedding ring for her ramp stint.

Talking during the post show conference, Kareena said, “Walking each season again feels very special. Thanks to Lakme I’m getting a chance to strut for the best of the best. This feels more special because of Gauri and Nainika. We embody the power of women. The freedom of what women want, whether it’s (about) being married, wanting to work, wanting to make your voice heard.”

She was later spotted in a red tracksuit while leaving the venue. She has just returned with husband Saif Ali Khan and son Taimur from their UK vacation. The actor is a judge on dance reality show Dance India Dance along with rapper Raftaar and choreographer Bosco.

Kareena will now be seen alongside Akshay Kumar in Good News and in Irrfan Khan starrer, Angrezi Medium. She also has Karan Johar’s production, Takht in her kitty.

Kareena followed a series of Bollywood celebrities who walked the ramp during the day at the fashion show. Actor Genelia Deshmukh walked for the second time in a red bridal lehenga. Accessorizing her look, the actor can be seen wearing long metallic neckpiece and earrings with smoky eyes and beachy wave’s hairdo. She had earlier walked with husband and actor Riteish Deshmukh during the week.

Actor Esha Deol also walked the ramp with daughter Radhya for the first time. While the Dhoom actor was in casuals, Radhya made her ramp debut in a pink frock and looked startled amid the large audience.