We will return home together if citizenship granted: Rohingya leaders 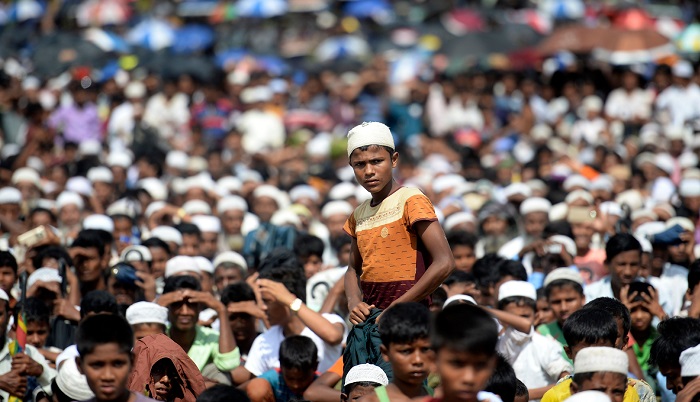 More than 1.1 million Rohingyas will return home together if Myanmar government recognizes them as its citizens, Rohingya leaders said on Sunday.

They came up with the demand while demonstrating a grand rally at Kutupalong Rohingya camp in Ukhia of Cox’s Bazar marking the second anniversary of their exodus from Myanmar into Bangladesh.

Rohingya leaders said they are ready to sit for a dialogue with Myanmar government in this regard.

Some 200,000 Rohingya rallied today just days after a second failed attempt to repatriate them.

On Sunday, children, hijab-wearing women, and men in long-skirt lungis shouted "God is Great, Long Live Rohingya" as they marched at the heart of one of the the world's largest exile camp, to commemorate what they described as "Genocide Day".

Under the scorching sun, thousands joined in a popular song with the lyrics "the world does not listen to the woes of Rohingya".

Mohib Ullah, a Rohingya leader, said the stateless minority wanted to return home, but only after they were granted citizenship, their security was ensured and they were allowed to settle back in their villages.

"We have asked the Burmese government for dialogue. But we haven't got any response from them yet," Ullah told the rally.

He also added, "We were beaten, killed and raped in Rakhine. But still that is our home. And we want to go back."

The displaced Rohingyas offered special prayers, seeking divine blessings for people who had died. They had large banners urging Myanmar to "talk to us about citizenship and Rohingya ethnicity".

Around 740,000 Rohingya from Myanmar's Rakhine state escaped in August 2017 during the brutal offensive, joining another 200,000 who fled earlier persecution.