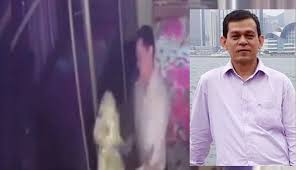 The recently withdrawn Deputy Commissioner (DC) Ahmed Kabir of Jamalpur left his government residence at dark of night on Saturday before reaching his withdrawal order at his office. The alleged female colleague of the objectionable video also went into hiding.

The woman seen on the viral video has been absent from her workplace since Sunday morning, said additional deputy commissioner Rajib Kumar Sarkar.

Earlier on the day, DC Kabir has been withdrawn and made officer on special duty (OSD) over the leakage of a surveillance camera footage showing him in a compromising position with a female office assistant.

In a notification, the Public Administration Ministry said the order will be effective immediately.

In the video clip, Ahmed Kabir was seen in offensive condition with a female colleague in office.

The 5-minute video, which is footage of a CCTV camera, went viral on Thursday night.

However, denying the fact, the DC claimed, the video is stage-managed.