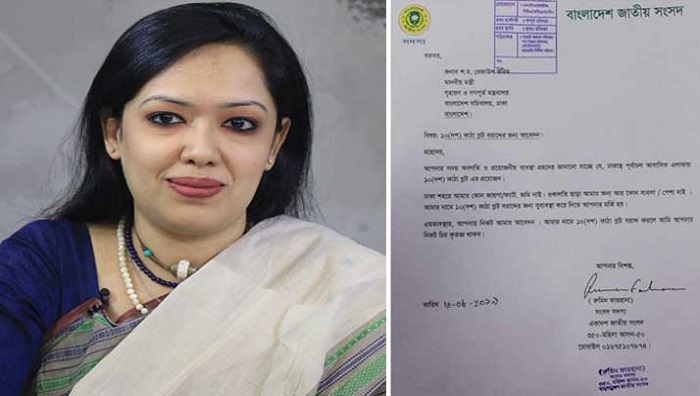 Barrister Rumeen Farhana, BNP reserved seat Member of Parliament (MP), demanded dissolution of the 11th parliament and made call for a re-election when she took oath as MP on July 9 this year.

Since then, whenever she got chances to appear before the parliamentary sessions, media and other party rallies, she reiterated her demands of re-election and termed the current parliament as ‘unelected and invalid one”.

Reiterating the demands of free and fresh election under neutral government, she is used to terming the parliament ‘unelected’ still now.

She sent a letter to Public Works and Housing Minister SM Rezaul Karim on August 3 appealing for a 10-katha plot from the government.

The letter went viral on Facebook, provoking mass criticism over her ambiguous stance of demanding dissolution of ‘unelected parliament’ and taking benefit from the same government.

In the letter, the reserved seat MP claimed that she has no apartment or piece of land in the capital.

According to a media report by Bangla online news portal Banglanews24.com, a 3-katha plot in the city’s Lalmatia area belongs to Rumeen Farhana.

Saifuddin Moni is also a political aide of Rumeen’s father Oli Ahad, who was a Language Movement hero.

Criticising Rumeen Farhana, Prince Enamul Haque, an ex-member of Bangladesh Chhatra League, wrote on his Facebook page, “Rumeen Farhana, who speaks ill of the AL-led government regularly and terms the parliament as unelected and invalid one, has sought valid plot from the government.”