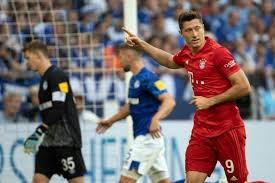 Hat-trick hero Robert Lewandowski hailed the strength of Bayern Munich's squad after securing a 3-0 victory over Schalke on Saturday, as new signing Philippe Coutinho made his Bundesliga debut for the German giants.

"Our squad is optimal now. We brought two good players on in the second half today, and we need that because we play a lot of games over the season," Lewandowski told Sky.

Coutinho, on loan from Barcelona, replaced Thomas Mueller in the 57th minute, coming on alongside fellow debutant Ivan Perisic with Bayern already two goals up.

"I am very happy to be here. The football here is very intense, and I have only been here for three or four days, so I need to work hard," Coutinho told Sky.

Bayern, who have not lost to Schalke in the league since 2010, took the lead from a penalty on 20 minutes.

English right-back Jonjoe Kenny, on loan to Schalke from Everton, clattered into the back of Kingsley Coman, and Lewandowski slotted home from 12 yards to score against Schalke for the ninth game in a row.

The Polish striker then curled in a spectacular free-kick to double the lead just after half-time.

A resurgent Schalke had several handball penalty appeals turned down as Bayern struggled to maintain control in the second half.

Yet Lewandowski killed the game off 15 minutes from time, slipping away from marker Salif Sane to complete the seventh Bundesliga hat-trick of his career.

"The expectations are always growing, but I always try to get better," said Lewandowski.

Everton loanee Kenny was not the only unfortunate Englishman on Saturday, as an own-goal from youth international Lewis Baker sent Bayer Leverkusen on their way to a 3-1 win over Fortuna Duesseldorf earlier in the day.

Chelsea loanee Baker turned a Kevin Volland cross into his own net after just six minutes.

Yet Volland bemoaned his side's lapse in concentration after Alfredo Morales grabbed a consolation goal for Duesseldorf.

"We deserved to win but we are not at 100 percent. Otherwise we would have kept a clean sheet," he said.

Werder Bremen still have no points from their opening two games after they lost a five-goal thriller to Hoffenheim.

The home side looked comfortable after second-half goals from Ermin Bicakcic and Ihlas Bebou had cancelled out Niclas Fuellkrug's opener and Bremen had a player sent off.

Yet Yuya Osako drew the visitors level with a slaloming run and fine finish before Pavel Kaderabek's header three minutes from time sealed a 3-2 win for Hoffenheim.

New Borussia Moenchengladbach boss Marco Rose celebrated his first three points as goals from Stefan Lainer, Alassane Plea and Breel Embolo saw his side come from behind to beat Mainz 3-1.

Freiburg, who thrashed Mainz 3-0 last weekend, picked up a second win in two as they beat promoted side Paderborn 3-1.

Goals from Luca Waldschmidt, Nils Petersen and South Korea's Chang-Hoon Kwon secured the win after Streli Mamba had given Paderborn an early lead.