2 years of Rohingya influx: 43 murdered in camps, 32 killed in gunfights 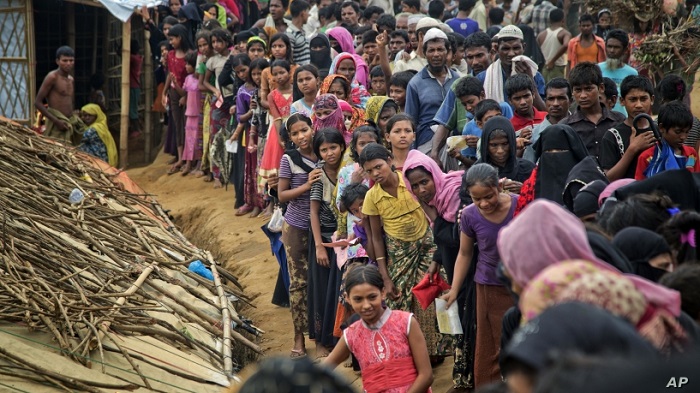 The Rohingyas, who were forced out of their motherland and found shelter in Bangladesh on humanitarian ground, are increasingly becoming a security threat to their host country.

Camps in the coastal district of Cox’s Bazar currently accommodating 1.1 million Rohingyas have turned into hotbeds of crime. Criminal gangs, active in the camps, often lock into bloody confrontations over control of markets, Yaba smuggling, and human trafficking.

Forty-three Rohingyas were killed in the last two years in what have been described as internal conflicts among these gangs. During this period, 32 others died in alleged gunfights with security forces.

Sources in police and locals say seven criminal gangs are active at the camps in Ukhiya and Teknaf. The ‘Abdul Hakim gang’ is the most notorious of them. Its members are accused of abduction, extortion, killing, Yaba smuggling, human trafficking and rape.

Locals are suffering from insecurity and anxiety after bids to send back the refugees to their homeland in Myanmar’s Rakhine State fell through twice.

The involvement of Rohingyas in crimes and their aggressive attitude are putting them at loggerheads with the locals and the law enforcers.

The tipping point was the killing of locals.

On Friday, hundreds of agitated locals barged into a Rohingya camp and vandalised makeshift houses and NGO offices following the murder of a local Jubo League leader in Teknaf.

Since 2017, two other locals were killed, allegedly by Rohingyas, while there have been reports of attacks on police and harassment of journalists by the forcibly displaced Myanmar nationals.

Dhaka has been saying that the prolonged stay of the large number of Rohingyas will pose a serious security threat, not only for Bangladesh but also for the neighbouring countries.

Palangkhali Union Parishad Chairman M Gafur Uddin Chowdhury said the camps have become a heaven for Yaba  and crime. “The locals have become helpless and are living in fear.”

Rab-15 commander Azim Ahmed said they are conducting drives to tackle crimes at the camps.

But neither such drives nor the increased presence of the law enforcers could dispel the fear of the locals.

He said the Rohingyas are becoming desperate.

“They’ve killed locals and assaulted members of law enforcement agencies and journalists. The locals are suffering from Rohingya scare,” he said. “The situation will only worsen in the coming days.”