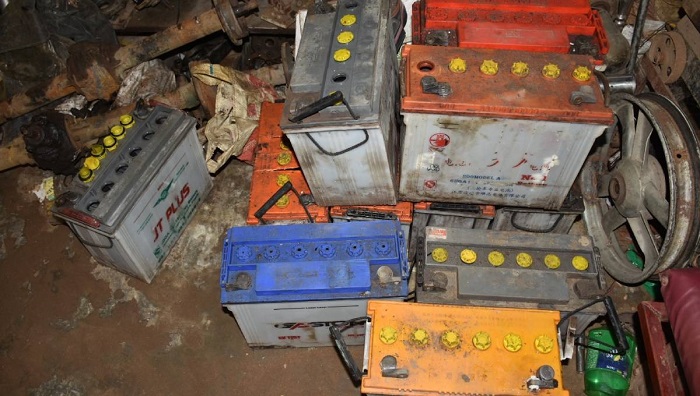 Acid, lead and other harmful chemicals from over 3,00,000 expired batteries, used in auto-rickshaws and motorised three-wheelers, are posing a serious threat to human health and environment.

There are at least 25,000 easy bikes and 11,000 auto-rickshaws in the city, according to Khulna Easy Bike Kallyan Samity and Easy Bike Chalok Samity. An easy bike uses five batteries while an auto-rickshaw has four.

These batteries remain usable for about eight months. This means, every year, an estimated 2,41,000 batteries are discarded.

Arman Munshi, an easy bike driver, said he sells six to seven expired batteries every year, each weighing 18-19 kg, to businesses at Sheikhpara Batterypatti at Tk 95 to Tk 100 per kg.

Soleman, a local battery trader, said there are more than 500 shops in the city that buy expired batteries and collect lead to sell it again to battery factories.

Kamruzzaman Sarkar, a chemist of the Department of Environment, blamed the lack of monitoring for the situation.

He said the lack of policy on the management of expired batteries means that they are treated like any other waste.

Md Anisur Rahman, conservancy officer of Khulna City Corporation, said they are monitoring the situation and would take legal steps against battery businesses that are polluting the environment.

Kamruzzaman said lead and acid from the rejected batteries are eventually entering the food chain and the human body, causing serious health issues.

“If these chemicals enter the human body, they can damage the brain, and sometimes people can become handicap. These chemicals may also cause cancer,” he said.