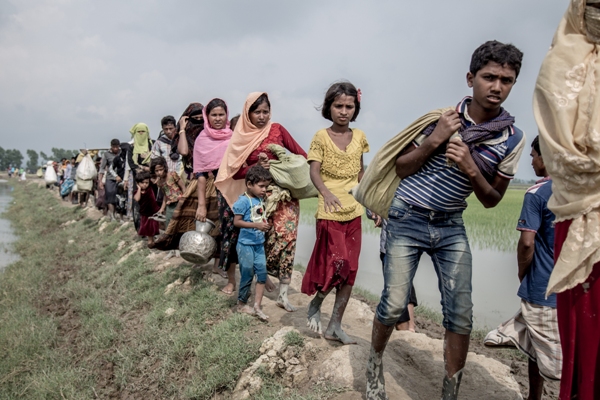 Two years since the Rohingya diaspora moved to Bangladesh, repatriation of the displaced community remains elusive despite an all-out effort by Bangladesh.

Around 11 lakh entered Bangladesh since August 25, 2017 following the brutal crackdown on the Rohingya people by the Myanmar’s military.

Although Bangladesh government allowed entering the displaced on humanitarian grounds, it has now become the biggest concern for the country as there is no sign of their repatriation.

With the new number of refugees added to the previous figure, the total Rohingyas living in the camps of Cox’s Bazar now stands at 1.2 million

No headway in repatriation

Nobody in Bangladesh can say when the repatriation would begin, or how long it would take to complete as Myanmar is not showing any interest to take back its people.

In a bid to repatriate Rohingyas, Bangladesh inked a deal with Myanmar in November 2017 which said that the repatriation must begin in January 2018.

Following a series of painstaking discussions between a proactive Bangladesh and an unwilling Myanmar, the two countries attempted to begin repatriation on November 15 last year.

But, the attempt failed due to refusal by the Rohingyas, tricky position of Myanmar and opposition from the international community.

Since the failed attempt, Bangladesh government put every effort to start repatriation, and finally saw a ray of hope for their eventual repatriation to Myanmar after China used its influence on Aung San Suu Kyi’s government to permit the minority Muslims to go home.

As per the list cleared by Myanmar, Bangladesh was all set to start repatriation on August 22, but this attempt of Rohingya repatriation also failed with no Rohingyas showing willingness to return to their country of origin.

Bangladesh to continue its effort

Though the repatriation could not take place, Bangladesh will continue its effort to begin the process at the earliest.

“The process is still on,” Foreign Minister Dr AK Abdul Momen said, adding that Myanmar could not create confidence among Rohingya people and it is their responsibility to address the trust-deficit.

Bangladesh is always ready to facilitate the return. Bangladesh is to impress upon Myanmar that it should do whatever is necessary for to gain their confidence and make arrangement for the return of the Muslim-minority group.

The Refugee Relief and Repatriation Commission (RRRC) Commissioner Mohammad Abul Kalam said they would keep up their efforts and remain ready for repatriating the displaced Myanmarese people any time the process resumed.

The Rohingya problem was becoming intense and having a negative impact on Bangladesh, he said, adding that international community has to come forward actively to create conducive atmosphere for the safe return of the Rohingya.

The role of non-government agencies has come to the fore as they are still opposing the repatriation of the Rohingyas, claiming that it was unsafe for for them to return home now.

It is believed that the Rohingya issue is a boon for NGOs as they are getting huge funds and thus they want it be delayed as much as possible.

Just hours before the latest bid to repatriate the Rohingyas, 61 local, national and international NGOs in a joint statement opposed the start of the process.

“There is no meaningful development in practicing human rights and ensuring free movement of Rohingya people in Rakhine state,” added the statement.

Irked by NGOs role, Foreign Minister said aid agencies actions were responsible for derailing the repatriation and that the authorities already have proof against some non-governmental aid organizations which were instigating the Rohingyas.

“Legal action will be taken against those who are motivating the Rohingyas to stay in Bangladesh,” the foreign minister warned.

Everyone is here, none there in Myanmar

From International communities to aid agencies, everyone is focusing on Bangladesh side on humanitarian grounds, but none could exercise any influence to enter Myanmar.

Since the mass exodus of the Rohingyas, everyone -- UN and international rights bodies, aid agencies -- has been advocating safe, dignified and voluntary repatriation and assistance. But there has been very little step to work on repatriation and creating pressure on Myanmar.

Even the outcries for the Rohingyas or condemnation for Myanmar from global leaders are not that loud.

The world has, it appears, to have forgotten the Rohingyas, leaving them to pass days in squalid camps on the hills around tourist beach town of Cox’s Bazar.

Due to the massive influx of Rohingyas outnumbering locals of Ukhiya and Teknaf upazilas in Cox’s Bazar, local communities were the worst sufferers in all aspects.

The local economy has also changed in strange ways, touching and affecting everyone’s lives across the Cox’s Bazar-Teknaf-Ukhia.

According to the recent survey ‘Impacts of the Rohingya Refugee Influx on Host Communities” conducted by The United Nations Development Programme (UNDP), Policy Research Institute of Bangladesh (PRI) mentioned that the Rohingya influx has put massive impact on local communities.

The report cited that prices of daily essentials have risen by about 50 percent, wages of day labourers have decreased, some 2,500 households fell below the poverty line, about 5,500 acres of reserve forests have been decimated and 1,500 hectares of wildlife habitat destroyed.