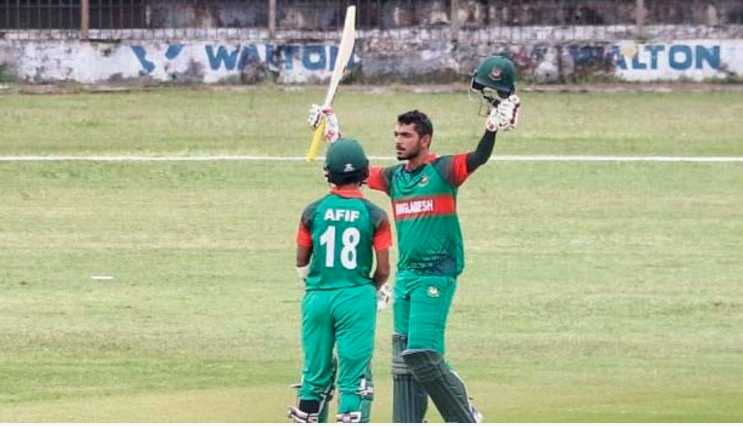 Replying to Bangladesh’s total of 269 for 5 in stipulated 50 overs, the revised target of Sri Lanka was set at 199 runs in 28 overs as the match was stopped for about two hours after the Bangladesh innings due to rain.

The islanders easily reached their target scoring match-winning 199 runs for the loss of only three wickets in 24 overs, with 24 balls to spare.

After the dismissal of first two wickets—Hasith Boyagoda (12) and Charith Asalanka (2)—for 68 runs in 10.1 overs, opener Pathum Nissanka pairing with two down Mirod Banuka guided the team towards the victory contributing 122 runs in the 3rd wicket stand.

Nissanka quick-fired unbeaten 115 runs off just 78 balls featuring eight fours and five sixes and was adjudged man of the match while Banuka played a hurricane innings of 55 runs off 32 deliveries with five fours and three sixes.

Earlier ,sent in to bat first, Bangladesh team, riding on a century by opener Saif Hasan and a half century by middle order Afif Hossain, set a moderate target of 269 for 5 before the match was stopped for about two hours for rain.

Bangladesh lost the first game by 187 runs but won the second match by two wickets to level the series 1-1.

Both teams will play a two-match four-day series. The first match is scheduled to be played in Khulna and the second one in Cox’s Bazar.