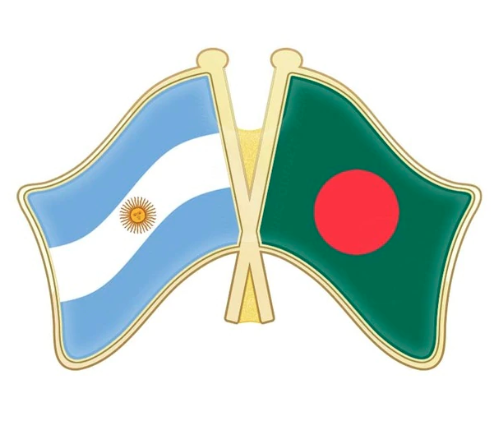 In a meeting with Argentine Production and Labour Minister Dante Sica, Tipu Munshi said Bangladesh has been exporting high quality and world class readymade garment (RMG) at cheaper price to different countries. He emphasized the necessity of lowering high import duty to pave

the way for exporting Bangladeshi RMG to Argentina.

Dante Sica said a meeting on the import duty cut for RMG with different stakeholders would be held next month. He said they would take necessary measures to strengthen the bilateral economic ties by identifying the field of mutual cooperation.

trade relations and cooperation between the two countries. The minister also showed his keenness to sign a memorandum of understanding to strengthen technical cooperation in the field of agriculture, cattle rearing, fisheries and sports.

The Argentine minister assured the Bangladesh minister that the FTA proposal would be discussed in the next MERCOSUR Conference.

Apart from them, the commerce minister met with the leaders of trade bodies and sought their cooperation for importing more RMG, pharmaceuticals, jute, shoes and plastic items from Bangladesh.

The minister also told the leaders that Bangladesh is developing 100 economic zones with the initiative of Prime Minister Sheikh Hasina in Bangladesh and invited them to invest there by availing lucrative offers for foreign investors.

Tipu Munshi invited the Argentine businessmen to visit Bangladesh to find ways to boost the bilateral trade between the two countries.

In last fiscal, Bangladesh imported goods of US$ 622 million from Argentina against exports of $18 million.