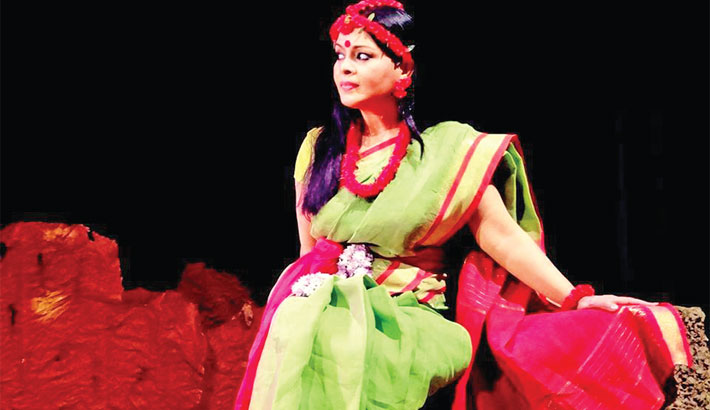 Roktokorobi, a metaphoric play by Nobel laureate Rabindranath Tagore, has been brought to stage by many theatre troupes in Bangladesh and neighbouring India. Of the productions, Prangone’s Roktokorobi’, directed by Nuna Afroz, has a special place in the hearts of Bangladeshi theatre-goers.

Named after a red flower, Roktokorobi tells about a king who lives behind an iron curtain while his subjects are to face cruelty and death delivered upon them on the slightest pretext.

The play takes place in a kingdom called Jaggapuri (sacrificial ground) where humanity has never set its foot. People are forced to work in the mines so that the king Makar-Raj can become wealthier, something which is very common in our society.

One day a young maiden Nandini comes to Jaggapuri in search of Ranjan, her love. Shortly after her arrival, every man in the kingdom, including the king Makar-Raj, feels a desire to get her.

However, when they fail to get her, the feeling of not having something that the hearts truly desire and the emptiness in their hearts start to take over and a conflict begins to befall as the play progresses forward.

The play wraps up in an unexpected climax after Tagore knits an intricate network of sequences that ultimately becomes a parable. Tagore devoted much effort to Rakt-akarabi, with at least eleven revisions.

Roktokorobi is the fourth production of Prangonemor. The theatre troupe premiered it at the Experimental Hall of Bangladesh Shilpakala Academy on February 2, 2008.