Jadeja proves his worth again 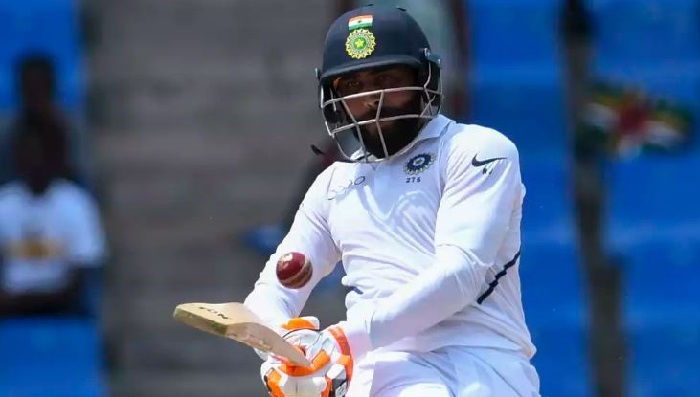 There are only eleven spots in a cricket team and when it is decided that there will be a lone specialist spinner in the playing XI, and the spinner left out has more wickets than anyone in the history of the game to have taken in the number of Tests he has played, it might be reasonable to think the player selected in his stead might just feel a little bit of pressure to deliver on the field to prove that the faith shown in him by the team management wasn't misplaced.

Ravindra Jadeja is no stranger to warming the benches; as recently as the ICC World Cup, he did not get an opportunity to be part of the playing XI for India's first seven matches of the tournament but made himself quite useful by getting on the field as a substitute, saving runs, taking incredible catches and keeping the batsmen honest with his strong and accurate arm from the deep. When he finally found an opportunity, he dragged India from the abyss in the semifinal with an innings of a lifetime to fall just short.

So when he was selected over R Ashwin - 65 Tests, 342 wickets, tormentor of West Indies with both bat and ball - the reasoning could have been that Jadeja has been in good batting form, is an asset in the field and that there are eight right-handers in the West Indies XI. The first chance Jadeja would get to prove his selection to be right was to dig India out of a bit of bother at 189 for 6. And of course he is an old hand at that.

The Rockstar, however, swatted away any necessity or obligation to prove himself to be worthy of the selection. He said he felt "nothing like that" and was just "focused on building partnerships with the lower order". He wasn't too worried thinking about "what's going on outside" the team environment or "what others [might] think" of his selection over Ashwin but "was just trying to give [his] best on the field."

Virat Kohli had mentioned earlier that one of the things his side had to learn the hard way was that they could not afford the fall of couple of wickets to turn in to a full blown collapse where they lose "six wickets in a session" as that makes it "impossible to come back against a quality team." While Ajinkya Rahane shepherded the middle order, Jadeja had to do the same with the lower order.

After Rishabh Pant departed early on Day two, Jadeja impressed upon Ishant Sharma that they could still "build a partnership" and get those runs that "irritates the oppositions" no end when batters at 8, 9, 10 and Jack put up resistance. It had the desired effect on the West Indies. Roston Chase concurred with Jadeja's thoughts stating that after they got the early wicket of Pant and as Ishant and Jadeja stuck around, "[West Indies] tried a bit too hard and it played into [India's] hands." He pointed out that their bowlers had gone away from their original plans and "gave too much width and short ball plans" and that their "energy went down a bit after that partnership built" which Jadeja and Ishant fed off of.

As the more credentialed batsman of the two, Jadeja led the way with scoring 33 runs and Ishant chipped in with 19 in the eighth wicket partnership of 60 runs in 116 balls - third highest of the innings in terms of runs and balls faced. The fact that India also received a bonus of eight extra runs pointed to West Indies' frustration in not being able to wrap up the tail.

When paired with the last man Jasprit Bumrah, Jadeja opened his shoulders and showcased some of the hitting abilities that makes him irresistible to a captain at number eight. He duly brought up his half-century and the now customary celebration before top edging an attempted pull. By the way, 29 runs were added for the 10th wicket and had pushed India to just three shy of 300, a far cry 25 for 3 and unimaginable at 207 for 7 given the usual fragility of India's tail.

With the ball, the primary skill he was chosen for, Jadeja did winkle out the wicket of Shamarh Brooks, and was able to turn a few on a pitch where "the ball was coming on nicely" but could not be his usual parsimonious self. Chase, Darren Bravo and Shai Hope took advantage of the flat wicket and attacked Jadeja, hitting him out of the attack. He'll still have another opportunity to have a say with the ball in the fourth innings when the pitch would have deteriorated more. On a wearing wicket, there is really no one better than Jadeja with his accuracy and speed. He then would have answered all the doubting thomases, not that he ever felt the need that he had to, because he is only "focused on his game" and the game is really good.

Oh, just in case you were wondering, Jadeja did have a direct hit from the deep at the non-striker's end but the wandering batsman had just managed to ground his bat in.