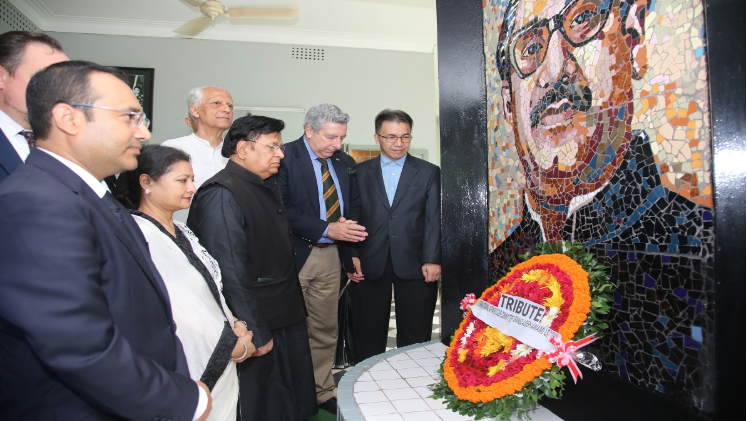 Bangladesh expects the United States and Canada to make a “difference” by sending back self-confessed killers of Father of the Nation Bangabandhu Sheikh Mujibur Rahman and help execute the court verdict establishing the rule of law in the country.

During a discussion titled “15 August and Its Impact on Bangladesh” at Bangabandhu Memorial Trust auditorium, the Foreign Minister said the diplomatic efforts will continue to get the two killers back before the celebration of Bangabandhu’s birth centenary.

They, along with Foreign Minister and diplomats, paid tributes to Bangabandhu and his family members placing wreath on the portrait of Bangabandhu there.

“I spoke to US Secretary of State Michael R Pompeo and our Prime Minister (Sheikh Hasina) has sent a letter to President Donald Trump on the issue. We’re hoping to have a positive outcome,” he said adding that the USA has not made any decision yet.

The Foreign Minister also met the US Secretary of State in Bangkok recently. “We’re hoping that the USA will make a decision.”

He said they shall be very pleased if the USA sends that killer, as they believe in the rule of law, before the birth centenary celebration of Bangabandhu.

Regarding Noor Chowdhury, the Foreign Minister said Canada does not share information as they do not like death penalty.

He said the government is still working on that and the court will give another verdict in November this year though Canada refuses to send back the killer.

Dr Momen mentioned that Canada does not send any of those killers to those countries where there is death penalty.

Dr Momen said they are still hopeful and cited an exception that Canada showed by sending back one gentleman in an alternative place instead of Texas where there has been no death penalty.

Once the person entered the place Texas had the privilege to take him back to their custody. “So, Canada can make a difference and can do the same,” said the Foreign Minister.

Military Secretary Brigadier General Jamil was also killed. Several members of a family in the capital’s Mohammadpur area were also killed by artillery shells fired by the killers on the same day.

On November 19, 2009, the Appellate Division of the Supreme Court upheld the death penalty of 12 convicted former army officers for the assassination of Bangabandhu and his family members.