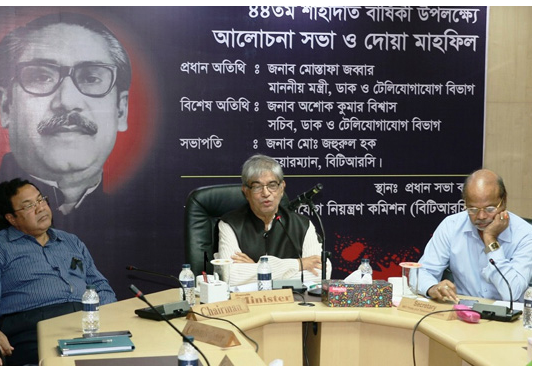 Posts and Telecommunication Minister Mustafa Jabbar said the evil forces, who committed brutal atrocities in August 15, 1975 and August 21, 2004, want to turn Bangladesh into a communal, fundamental and failed state.

“The forces opposed the independence of Bangladesh and they now want to destroy the country…We can never let them to do so,” he said.

Mustafa Jabbar said these while addressing a programme as the chief guest organised by Bangladesh Telecommunication Regulatory Commission (BTRC), marking the 44th martyrdom anniversary of Father of the Nation Bangabandhu Sheikh Mujibur Rahman and the National Mourning Day.

The minister said the people, who wanted to make Bangladesh as a failed state for long, have not given up yet as they are still hatching conspiracy
against the state.

The minister said the country is going to be Bangabandhu’s Sonar Bangla under the leadership of Sheikh Hasina.

As per the statistics of Asian Development Bank (ADB), the rate of achieving growth by Bangladesh is one of the best in South Asia, he added.

A special munajat was offered seeking eternal peace of the departed souls of the martyrs of August 15, 1975.