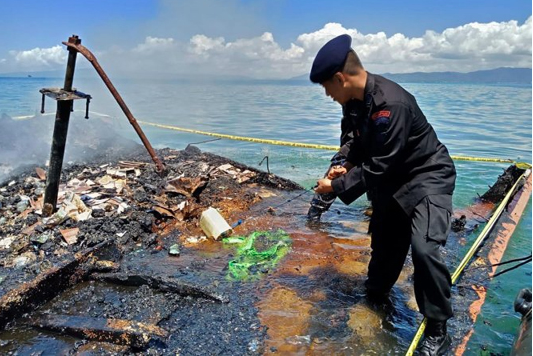 Nearly two dozen people are missing from the carcass of a ferry that went up in flames off Indonesia’s Java island, a port official said Friday.

The boat was en route from Indonesia’s second-biggest city Surabaya to Balikpapan on Borneo island with some 277 people aboard when it caught fire Thursday evening, according to the official.

Television images showed plumes of black smoke coming out of the boat, as search teams hunted for at least 22 missing passengers.

“There were 277 people on board and so far 255 have been rescued alive,” Syachrul Nugroho, a spokesman for Surabaya’s Tanjung Perak port, told AFP.

“Twenty-two people are still unaccounted for… but we don’t know if they’re still on the boat.”

The cause of the accident was not immediately clear.

Nugroho said it appeared that a fire broke out and the ferry’s power went down, cutting off water pumps.

“The crew couldn’t extinguish the fire because the water pumps weren’t working so passengers started to abandon the ship,” he added.

Passenger ferries are a common means of transport in Indonesia, an archipelago of some 17,000 islands, despite poor safety standards.

In June, 21 people died when an overloaded ferry sank in rough seas off Java’s north coast.

Some 160 people drowned when an Indonesian ferry sank into the depths of one of the world’s deepest lakes on Sumatra island last year.

More than 300 people are estimated to have drowned in 2009 when a ferry sank between Sulawesi and Borneo.