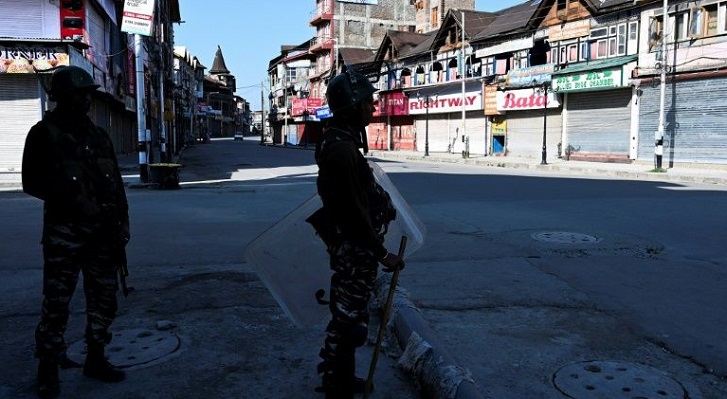 An Indian soldier was killed by Pakistani forces on the Kashmir border, the military said Friday, as a tense lockdown in the region of seven million residents continued for the 19th day.

The nuclear-armed neighbours regularly target each other with mortar shells and gunfire on the de facto border known as the Line of Control (LoC) in the disputed Himalayan territory which is claimed by both India and Pakistan.

But the latest skirmish comes as ties hit a new low after India revoked the autonomy of the part of the region it controls, sparking protests from the local population and outrage from Pakistan.

The Indian soldier was manning a post in mountainous Rajouri district Friday when he came under "unprovoked fire" from across the border, local media reports said.

The death was the fourth claimed by the Indian side since the August 5 decision to strip the region's special constitutional status.

Pakistan's military has said five people including three soldiers have died in shelling by Indian forces.

The border clashes are happening amid a curfew in the valley, including its main city of Srinagar where fears of large-scale street protests against India's move persist.

Posters have sprung up across the region calling for a public march to the local UN office on Friday.

"Preachers in all mosques should make the people aware of India's plans to change the demography of the state (Jammu and Kashmir)," handbills written in Urdu said.

Sporadic demonstrations have rocked some parts of Srinagar, with clashes between stone-throwing protesters and government forces leaving more than 100 injured.

Residents in the Muslim-majority region have complained of a stifling environment as well as the inability to get in touch with family and friends worried about their wellbeing, although some of the restrictions have been eased in recent days.

Kashmir has waged a three-decade-long armed rebellion against Indian rule with tens of thousands of lives, mostly civilians, lost in the conflict.

Ahead of its controversial announcement, India rushed tens of thousands of extra troops to the restive region to join 500,000 already in the valley, and imposed a strict communications clampdown.

France would "remain attentive to ensure the interests and rights of the civilian populations are properly taken into account in the territories on both sides of the (Kashmir) ceasefire line", Macron said.