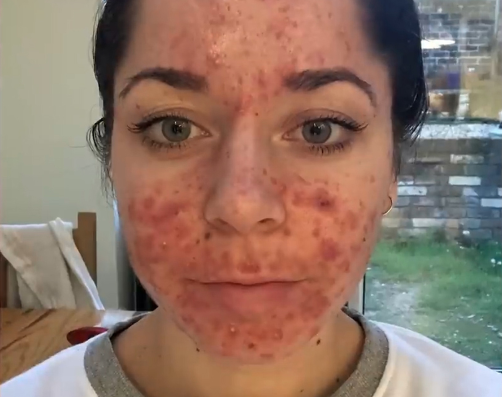 A personal trainer felt was forced to quit her job after boils erupted all over her face in the "worst case of acne" doctors had ever seen.

Emily Keel, from Portsmouth, suffers from cystic acne, which has caused aggressive boil-like spots across her entire face.

The super fit gym worker was horrified to be told by one doctor that it was the worst case he had ever seen.

She was so devastated she felt had no choice but to leave the job she loved becauseshe feared she "wasn't a good role model".

Emily admits the condition, which has now improved, affected her mental health.

She said: "Working in the gym when my acne was getting worse, I think I was really conscious I wasn’t being a good role model.

"I felt like people were judging me and thinking that I wasn’t living a healthy lifestyle.

"It was a vicious cycle, especially when you have the pressure of thinking you should look a certain way in the job role as well."

Desperate, Emily booked appointments with a dermatologist for help with treatment for her skin.

It was at one of these where she was told by a doctor it was the worst case they had ever seen.

The tactless diagnosis, Emily confesses, was her lowest point.

She said: "It was really hurtful coming from a medical professional. I was really disappointed.

"I thought you should be able to handle situations better or know that it’s going to affect someone’s mental health.

"I think at that point, I just felt really, rubbish about my skin."

Emily's dad, Stephen, had gone with her tot the appointment and admits he was shocked to hear the doctor describe her condition as the worst ever seen.

He said: "That was quite hard to hear.

"Through the worst time and everything I really just felt that we’d lost her and lost the personality that she had."

When Emily’s acne flares up, hard boil-like lumps can form underneath the skin on her face.

And comments made to her about her appearance are one of the hardest things she has to face.

Emily said: "Somebody said to me, 'what’s wrong with your face?', I knew it didn’t come from an unkind place.

"It felt very insensitive and I was taken off guard. I got quite upset about it."

A pivotal moment in Emily’s life was when she first posted a picture of her acne on social media.