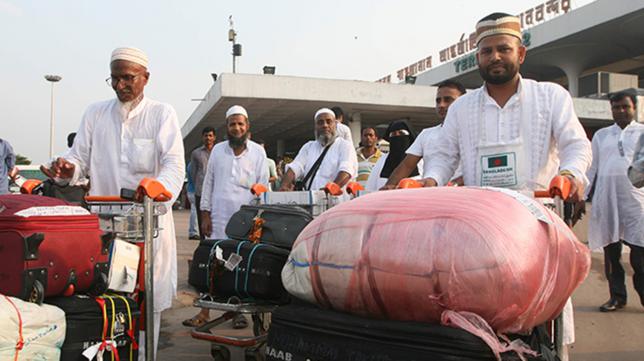 A total of 24,735 pilgrims have returned home in 68 return flights during the last seven days after performing hajj in Saudi Arabia.

Among the 68 flights, 29 were operated by Biman Bangladesh Airlines while 39 by Saudi Arabian Airlines, official sources said today.

According the sources, the return flights of hajj pilgrims started on August 17, which will end on September 15. On August 17, the first flight of Biman Bangladesh Airlines returned home with 418 Hajj pilgrims.

“This year, a total of 127,152 pilgrims went to Saudi Arabia from Bangladesh in 365 flights for performing hajj. The return flights of hajj pilgrims started on August 17 and those will continue till September 15,” general manager (public relations) of Biman Bangladesh Airlines Tahera Khandaker told BSS.

She said a coordination meeting of Hajj administrative team was held at Bangladesh Hajj Office conference room in Makkah yesterday with Religious Affairs Secretary Md Anisur Rahman in the chair.

During the meeting, the Biman official said, Anisul expressed satisfaction about the overall hajj management and conveyed sympathy to family members of the hajj pilgrims who died during hajj this year.

Around 96 Bangladeshi hajj pilgrims have so far died in Saudi Arabia before and after hajj this year.