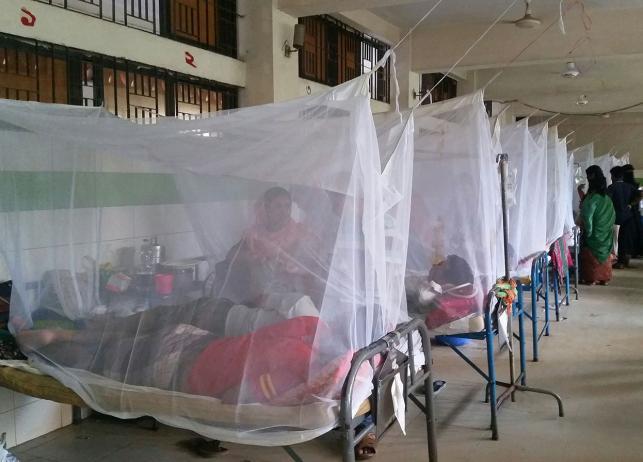 A housewife and a student of a Madrasha have died of dengue fever in Satkhira amid the massive outbreak of the mosquito-borne disease across the country.

Shahanara Khatun, 35, wife of Khalilur Rahman, hailing from Choygharia village of Satkhira sadar upazil, breathed her last at around 1:00am.

Dr Abu Shaheen, Satkhira Civil Surgeon, said Shahanara was admitted to Sadar Hospital after being diagnosed with dengue on August 18.

On Thursday night, the physicians referred her to Khulna Medical College Hospital following deterioration of her condition but she died while being taken to Khulna.

The other deceased, Alamgir, a madrasa student in Jashore, was diagnosed with dengue on August 19 after he was admitted to Kaliganj Upazila Health Complex with fever.

He was shifted to Satkhira Sadar Hospital as his condition deteriorated, said Dr Sheikh Tayebur Rahman, health official of the upazila health complex.

Alamgir was later admitted to a private hospital in Khulna where he passed away yesterday around 6:00pm.

Some 292 patients infected with dengue are taking treatment at different hospitals and clinics in the district.

According to the government, 59,592 patients infected with dengue were hospitalised across the country and 53,398 of them discharged after treatment since the beginning of this year.

Currently, 6,147 dengue patients are undergoing treatment at different hospitals and clinics, according to the Health Emergency Operation Centre and Control Room of the Directorate General of Health Services.

The government has so far confirmed the deaths of 47 people but unofficial estimates suggest the death toll is much higher.