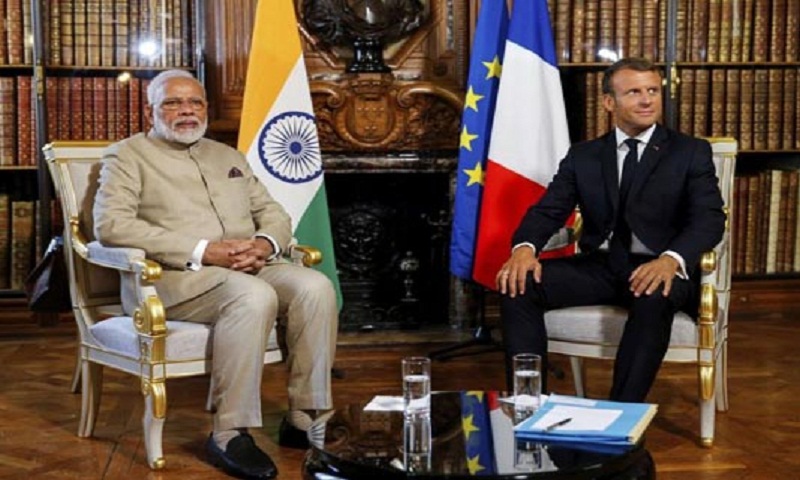 France’s Emmanuel Macron had a “frank” exchange with India’s Narendra Modi about tensions in divided Kashmir on Thursday, telling him Paris would remain attentive to the rights of people living both sides of the ceasefire line.

As tensions soared in the flashpoint region, the French president said he would also have a similar exchange with Pakistan’s Prime Minister Imran Khan in the coming days.

His remarks came after talks with the Indian premier at the chateau in Chantilly, just north of Paris, reports AFP.

On August 5, Modi’s Hindu nationalist government scrapped the autonomy of Indian-controlled Kashmir, a divided Muslim-majority region that has enjoyed special status in the Indian constitution since the country’s independence from Britain in 1947.

The move enraged many Kashmiris and has sparked tensions with Pakistan, which also claims the region, raising growing international concern over a flare-up in violence between the two nuclear-armed powers.

Macron said he told Modi it was the responsibility of both India and Pakistan “to avoid any deterioration on the ground which could lead to an escalation”, noting the importance of resolving their differences bilaterally.

And he said France would “remain attentive to ensure the interests and rights of the civilian populations are properly taken into account in the territories on both sides of the (Kashmir) ceasefire line”.

French officials had earlier said they would push Modi to explain how he saw things playing out in the region in the coming days and weeks.

Since August 5, the Indian authorities have imposed a communications blackout and heavy restrictions on movement in the parts of Kashmir it controls, arresting at least 4,000 people and raising growing alarm about rights violations.