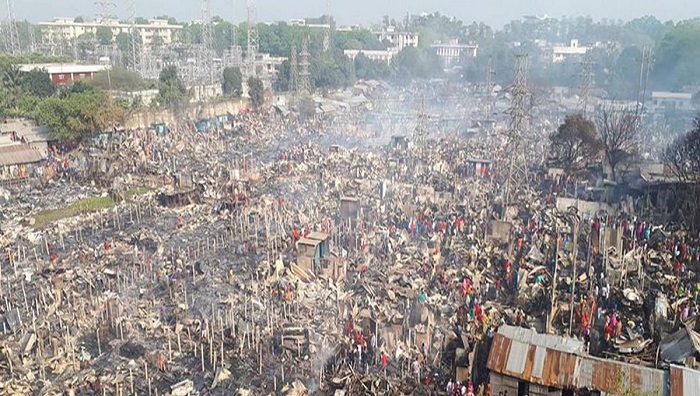 Speakers at a dialogue on Thursday demanded the formation of a ‘national slum commission’ to unearth the reasons behind repeated fire incidents in slums.

Speakers of the programme also demanded the government provide Tk 15 crore as compensation to 5,000 families of ‘Chalantika’ slum gutted in Mirpur on Friday last alongside taking steps for ensuring accommodation for the low-income people.

Speaking at the programme, Oikya Nap President Pankaj Bhattacharya said there is a High Court rule not to remove slums, but many are being evicted every year following fire incidents.

Pankaj also said it should be identified whether any vested quarter is setting fire to slums to grab lands. “We should keep it in mind slum dwellers are human being and they’re making great contributions to the state.”

Poba Chairman Abu Naser Khan said slum dwellers are being treated negatively in society, but the city dwellers will face serious difficulties if the low-income groups stop working for them.

“It’s strange that we seeing slums burning in fire after a regular interval. The mystery behind the slum fires will have to be exposed and victims must be given compensation,” he added.

The speakers said there is a notion among the slum dwellers that a vested group used to set fire to the slums to grab the government’s land.

They also said the slum dwellers are always in fear of getting evicted as there is no step to ensure their safety and accommodation, though they play an outstanding role in keeping the city dynamic thorough their various services.

The two leaders of slum dwellers said they want the government to ensure their right to accommodation as Prime Minister Sheikh Hasina last year announced to give them the housing facilities.