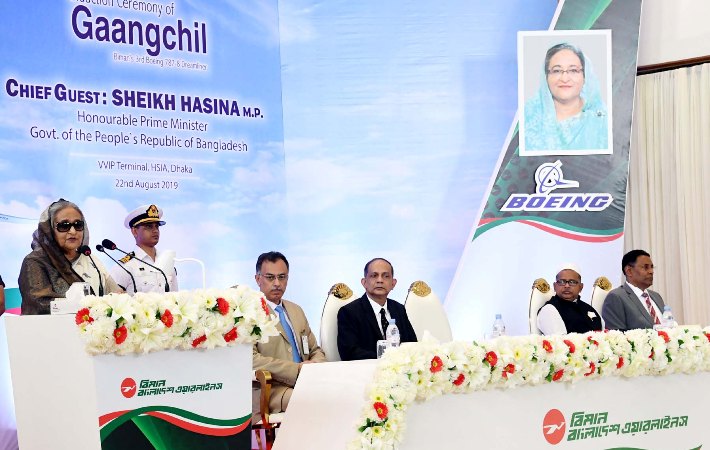 Terming Bangladesh Biman as a ‘symbol of independence’, Prime Minister Sheikh Hasina on Thursday asked authorities of the national flag carrier to enhance its reputation by improving passenger services further.

“It’s a responsibility of all involved in operating the national flag carrier to retain and increase reputation of Biman by further raising its passenger services,” she told the induction ceremony of ‘Gaangchil’, Biman’s third Boeing 787-8 Dreamliner, at the VVIP Terminal of Hazrat Shahjalal International Airport (HSIA) in the capital this afternoon.

Simultaneously, the prime minister called for proper maintenance of the aircraft of Biman Bangladesh Airlines.

“I’ll like to tell those involved in running Biman to work with utmost sincerity and patriotism … You’ll have to work keeping in mind that Bangladesh is our country and Bangladesh Biman is our own asset,” she said.

Mentioning the commissioning of ‘Gaangchil’ today, Sheikh Hasina said, “I’ll like to request all concerned to take care so that the aircraft can fly properly spreading its wings.”

The premier said the induction of Gaangchil into the Biman’s fleet is another milestone for the national flag carrier. “It’s a day of fulfilling the dream,” she said.

Earlier, the prime minister commissioned ‘Gangchil’ cutting a ribbon at the VVIP Tarmac of HSIA.

After the inauguration, Sheikh Hasina boarded and inspected inside the aircraft and talked to its pilots and other crew members.