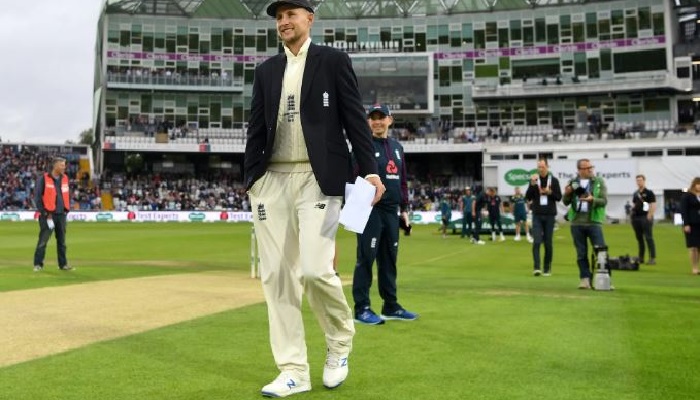 England captain Joe Root won the toss and decided to bowl against Australia in the third Ashes Test at his Headingley home ground on Thursday.

After rain delayed the toss by some 30 minutes, Root decided to field in the hope his attack, featuring fast bowler Jofra Archer in just his second Test, could take advantage of the overcast conditions.

Batting promised to be awkward under the glare of the floodlights, with grey skies promising to assist England's quicks.

But no sooner had the toss taken place then the rain returned, with the pitch and square fully covered again.

"You look at the conditions and they couldn't be more suited for bowling and we'll try to pick up wickets early on," said Root, who could see the reasons for his decision no longer apply if the match starts in bright sunshine.

"It looks a good pitch and it will stay good for a long time so we want to make the most of these conditions while they are here," the Yorkshire batsman added.

England were unchanged from the side that had the better of a rain-affected draw in the second Test at Lord's, with opener Jason Roy passed fit to play after being hit on the head batting in the Headingley nets on Tuesday.

"Jason Roy has done a number of concussion tests and passed them all," Root said.

"Player safety is paramount, especially in light of what happened last week, so we had to be sure and he is ready to play.

"You want to be part of these big moments. We're very excited and we want to finish this week at 1-1."

Australia, still 1-0 up in the five-match series after their 251-run win in the first Test at Edgbaston, made three changes to their side.

With star batsman Steve Smith ruled out with a concussion suffered when hit on the neck by a 92 mph Jofra Archer bouncer at Lord's, Marnus Labuschagne -- cricket's inaugural concussion substitute when replacing Smith at Lord's -- came into the side.

Struggling opener Bancroft has made just 34 runs in four innings this series, with Harris, who has played six Tests, now given his chance at the top of the order.

Siddle was also left out, with the quicker Pattinson returning to the XI after playing at Edgbaston but missing out at Lord's.

Australia captain Tim Paine insisted his side had wanted to bat first.

"I was hoping he (Root) won the toss," Paine said.

"We were going to have a bat

"The wicket looks quite dry underneath. We're hoping we'll get a good first-innings total and bring (off-spinner) Nathan Lyon into the game in the fourth innings."

As for Smith's absence, the wicketkeeper added: "He's a huge miss -- when the best player in the world goes out of your side.

"It's up to your senior players to step up."

Australia hold the Ashes but have not won a Test series away to England for 18 years.