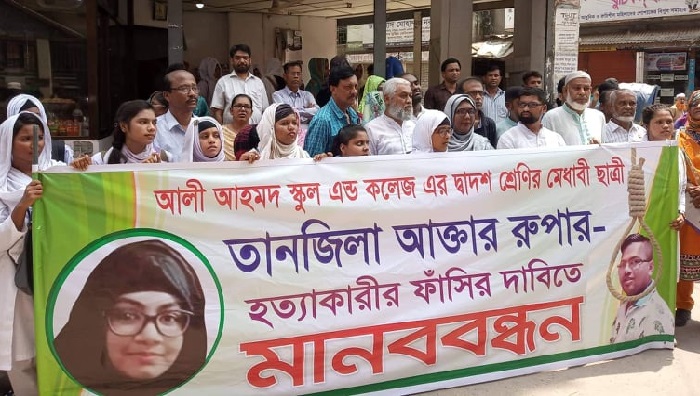 The teachers, students and their guardians of Ali Ahmed School and College formed a human chain programme demanding exemplary punishment for the accused in a college girl murder case in front of the school at Goran in the city’s Khilgaon area on Thursday morning.

The human chain programme took place at 10:00am this morning, Nasima Parveen, the principal of the college confirmed this while talking to the Daily Sun.

They are going to submit a memorandum to the administration concerned demanding hurried and proper trial of the accused and justice for Rupa, she said.

On August 10, Tanzila Akter Rupa, a student of class XII of the college section, was allegedly killed by falling from the rooftop of the skyscraper city centre in Motijheel.

Later, on the same day, victim’s mother filled a case against an alleged killer with the Motijheel Police Station after police arrested him for his involvement in killing Rupa.