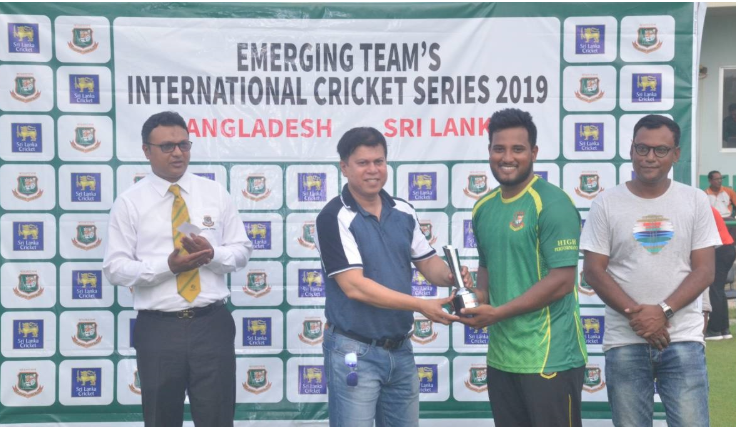 After losing the first game by a big margin of 186 runs, Bangladesh emerging cricket team made a good comeback in the second game to level the three-match one-day series 1-1 beating their Sri Lankan opponent by two wickets at BKSP ground in Savar.

Touring Sri Lanka Emerging team won the toss and opted to bat first in the flat track of BKSP and put up a challenging total of 273 runs all-out in 49.4 overs.

Opener Pathum Nissanka struck 55 while the middle-order batsman hit Kamindu Mendis hit 65 off 81 with five fours. These two batsmen laid down the foundation for Sri Lanka to a big total.

Along with them, Charith Asalanka (45) and Jehan Daniel (43) did well with the bat to help their team to set up a total that can be defendable while bowling.

In reply, Saif Hassan and Mohammad Naim failed to put up a big opening stand as the parted ways adding only 12 runs on the board. Naim fell as the first wicket scoring only five runs while Saif posted 27 on the board.

However, in the third wicket stand, captain Shanto pairing with Yasir added 120 runs to lead the team towards victory.

Shanto scored 77 off 88 with nine fours and one six while Yasir struck 85 off 93 with three fours and five sixes. Afif Hossain (18) and Jaker Ali (11) also contributed with the bat to seal the game.

For Sri Lanka, Jehan and Shiran Fernando bagged two wickets each but failed to win their team the series with one match to play on August 24 at Sheikh Abu Naser Stadium in Khulna.

After the three-match one-day series, both teams will lock horns in a two-match four-day series. The first four-day match will be held in Khulna while the second one will take place in Chattogram.