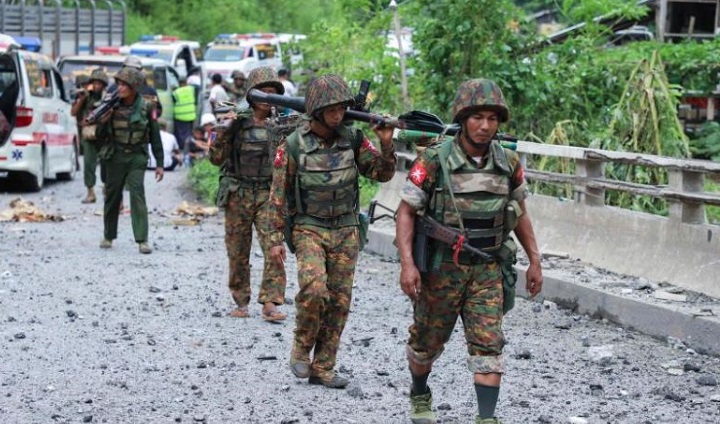 Armed government troops cross a bomb damaged bridge in the compound of the Gote Twin police station in Shan State on Aug 15, 2019 after it was attacked by ethnic rebel groups.PHOTO: AFP

At least 19 people were killed and more than 2,000 displaced since fighting broke out between government troops and ethnic minority insurgents in northern Myanmar last week, agencies said quoting government officials.

The displaced people in the latest fighting are sheltering in monasteries around Lashio town in the north of Shan State, and are depending on aid groups and the government for their supplies of food and other basic needs, aid workers said.

The information came to light on Wednesday after different local and international media including Reuters have published report on the issue.

The latest violence erupted in the northern region of Myanmar has apparently emerged as a stumbling block for the civilian leader Aung San Suu Ky to bring peace amid a stuttering transition from full military rule.

Tension in the region has risen since Thursday, when a coalition of anti-government insurgent groups known as the Northern Alliance staged attacks including on an elite army college that killed more than a dozen people, mostly security forces personnel.

But conflict has escalated in Kachin State in the north and in Shan State, as the western Rakhine region on the border with Bangladesh.