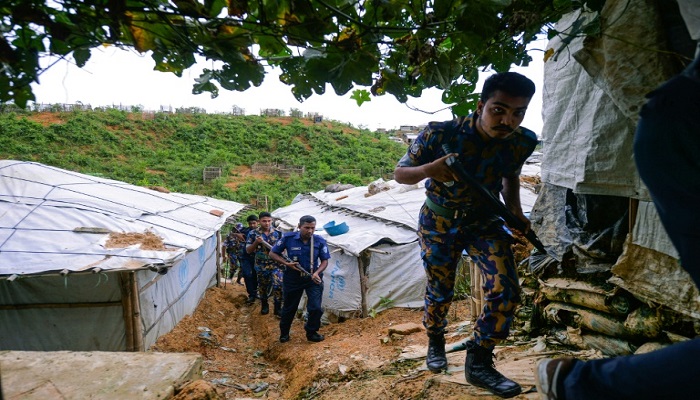 When hundreds of thousands of Rohingya fled Myanmar into Bangladesh two years ago, local communities were mostly welcoming.

Today that welcome has worn thin, and resentment, anger and fear are creeping in.

"At first, as a member of the Muslim community, we helped them," said Riazul Haque, 28, a labourer from Hakimpara, near the border town of Ukhiya.

Haque allowed around 60 Rohingya families to settle on a piece of his land, thinking they would remain for two or three months at most.

"Now it seems the rest of the Rohingya living in Burma (Myanmar) will arrive soon in Bangladesh," he complained.

Ukhiya was home to around 300,000 people, but the Rohingya influx of August 2017 has swelled the population to more than three times that many.

Most of the Rohingya people are housed in the sprawling Kutupalong camp, but others -- particularly those with resources -- ventured out in search of opportunity.

Locals blame them for everything from increased pollution and a rise in petty crime to a lack of work.

Mohammad Sojol said he lost his job as a rickshaw driver because vehicle owners now prefer to hire refugees for less pay -- even though officially they aren't allowed to work.

"They are stealing marginal jobs from us by bribing law enforcers," he told AFP.

Some of the Rohingya who settled outside the official camps are now being forced to return and children enrolled in local schools are being expelled.

The largely Muslim Rohingya fled a military crackdown in Myanmar that the UN has likened to ethnic cleansing, joining some 200,000 already in Bangladesh.

Only a handful have returned, fearing for their safety in a country where they are denied citizenship and treated as illegal immigrants.

Ikbal Hossain, the acting police chief of the Cox's Bazar district, said the enforced "idle and workless" lifestyle of the refugees made them "unstable".

"They are receiving all sorts of aid, but they have ample idle time as they don't have any other work," he told AFP.

This is driving many in the hands of drug gangs, he said.

Tens of millions of methamphetamine pills enter Bangladesh from Myanmar through Cox's Bazar and drug kingpins frequently use Rohingya as mules to carry the narcotics to nearby cities.

At least 13 Rohingya were shot dead in what police said were gunfights with officers while allegedly carrying thousands of the "yaba" pills.

The presence of the narcotics mafia has, in turn, led to violence inside the camps, prompting police to increase their presence.

Crime and murder rates in the camps were higher than national statistics, according to police, which record roughly 3,000 murders annually in a country of 168 million.

Police chief Hossain said some 318 criminal complaints had been filed against Rohingya since August 2017 -- including 31 murder cases.

But experts warned the number of murders in the Rohingya camps were far higher than the figures quoted by police.

This has added to mistrust by locals.

Rabeya Begum, a housewife living in Madhurchhara hamlet near Kutupalong said the refugees were violent at times, and she was scared of their sheer numbers.

"We don't feel secure at night but I cannot simply leave my homestead or else the rest of my land will be occupied by the refugees as well," she told AFP.

"We thank Bangladesh for sheltering us. We help each other because we are neighbours," he said.

"We'd do the same thing for them."