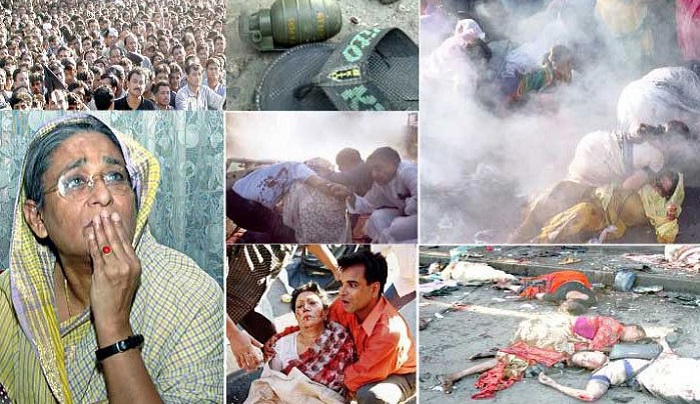 Today is the 15th anniversary of August 21 grenade attack that left 24 people, including women's affairs secretary of Awami League (AL) Ivy Rahman, dead and scores others injured. AL president and the then opposition leader in parliament Sheikh Hasina narrowly escaped the attack.

It was yet another public meeting of the then opposition Awami League against terrorism on 21 August 2004 with several thousand supporters and top leaders, including the party chief Sheikh Hasina, present. It was a makeshift podium on a truck as the BNP-Jamaat government disallowed the use of the usual podium.

As the clock struck 5:22 pm on that fateful day, all hell broke loose as assailants hurled grenades indiscriminately on the rally in front of the Bangabandhu Avenue head office of the party..Besides the sound of grenade blasts, there were men and women screaming either in panic or in pain after being hurt.

The area was flooded with blood and pieces of human flesh. The worried world sought to know the status of Sheikh Hasina, who suffered serious injuries to her right ear, but survived as the fellow party men formed a human shield. The grenade targeting her luckily did not explode.

It became yet another black day in the history of Bangladesh —- an unprecedented deadly, barbaric and bizarre incident that stunned the world. At least 24 people, including AL’s women affairs president Ivy Rahman, were killed and over 500 injured.

People of the country are still haunted by the August 21 grenade attack even after 15 years of the incident.

President Abdul Hamid and Prime Minister Sheikh Hasina paid rich tributes to the victims of the August 21 grenade attack in 2004 and prayed for eternal peace of the departed souls of the martyrs.

In separate messages on the eve of the 15th anniversary of the heinous grenade attack, they urged all to work unitedly to turn the sorrows of August 21 into a strength by building a peaceful and democratic Bangladesh which will be free from terrorism and militancy.

In his message, President Abdul Hamid termed the heinous grenade attack as another “black chapter” in the history of Bengali nation.

The President said the history’s most barbaric grenade attack was launched on August 21 during an Awami League rally at Bangabandhu Avenue as per a blueprint to kill Bangabandhu’s daughter Sheikh Hasina.

Though Sheikh Hasina escaped death by the grace of Almighty Allah, Awami Mahila League’s former President Ivy Rahman and 23 other leaders and activists were killed and many others injured, he added.

Abdul Hamid said many of the injured persons in the attack became crippled for life and now living in endless miseries.

“The August 21 in 2004 grenade attack was aimed at making bankrupt the AL and Bangladesh in leadership and stopping democratic process and establishing autocracy and militancy,” he said, adding that the people of the country did not let it happen.

The President expressed his optimism that the pro-democratic and patriotic people will come forward being imbued with the spirit of the War of Liberation to build a dignified, happy and prosperous Bangladesh.

He said mutual respect and tolerance are a must to make the country’s democracy meaningful.

In a separate message, Prime Minister Sheikh Hasina said the barbaric grenade attack was carried out on that day in 2004 under the direct patronization of BNP-Jamaat alliance on an anti-terrorism rally of Awami League to kill me.

Terming the grenade attack a ‘stigmatized day’ in the political history of the country, she said, “Our party leaders and workers saved me from the series of grenade attacks by forming a human shield.”

“I survived the attack due to immense blessings of the Almighty but some 23 leaders and workers including president of Mahila Awami League Ivy Rahman embraced martyrdom, the Premier said, adding that more than 500 leaders and activists, journalists and security personnel were injured.

Sheikh Hasina said it was the moral obligation of a government to arrest the culprits involved with such a heinous attack. But, the then government of BNP protected the killers and helped a number of attackers to leave the country.

They destroyed the evidence of the incidence and in the name of investigation, diverted the heinous incident to another direction, she said.

“But truth can never be suppressed. Today, it has come out through an investigation that many high-ups of the BNP-Jamaat alliance government were directly involved with the attack,” said the Prime Minister.

“Rule of law has been established through this verdict. We hope this verdict will be executed following all legal procedures,” she said.

Sheikh Hasina said whenever BNP-Jamaat alliance came to power, they intended to make the country a failed state by patronizing militants and terrorists.

The court also awarded life imprisonment to 19 people, including BNP acting chief Tarique Rahman, who is now staying in London.

Earlier three accused—- Jamaat secretary general Ali Ahsan Mohammad Mojaheed, and Huji chief Mufti Abdul Hannan and his associate Sharif Shahedul Alam alias Bipul— were dropped from the cases as they had been executed after their conviction in other cases.

After the barbaric attack, the then BNP-Jamaat government staged ‘Joj Mia drama’ showing him the prime accused in a case filed over the grenade attack to protect the real culprits.

Marking the day, the ruling Awami League, its front organisations and different political, socio-cultural and professional organisations have chalked out elaborate programmes to observe the day.

The party will arrange a discussion programme at 4:00 pm at Krishibid Institution in the capital.

Prime Minister Sheikh Hasina is scheduled to chair the programme.

The ruling party alleged that the BNP-Jamaat alliance government had carried out the grenade attack to kill Sheikh Hasina to make the party leaderless.

AL leaders and activists and common people got stunned when grenades exploded at the political gathering, killing at least 16 party activists on the spot.

Ivy Rahman, wife of late President Zillur Rahman, succumbed to her injuries after fighting for 58 hours at a hospital.

Party leaders and activists started screaming and made a human shield to save Sheikh Hasina’s life.

Her private security personnel Mahbubur Rahman sacrificed his life while trying to save Sheikh Hasina.

The government filed two cases — one for the murder and the other under the Explosive Substances Act.

The government is trying to bring back 18 fugitives in the cases to the country through Interpol.

BNP acting chairman Tarique Rahman is now staying in London while Maulana Tajuddin Ahmed and his younger brother Ratul Babu are believed to be hiding in South Africa.

One of the key accused in the cases, former minister and Jamaat-e-Islami secretary general Ali Ahsan Mohammad Mojaheed was hanged to death in a case of crime against humanity during the War of Liberation in 1971 while the chief of banned militant outfit Harkatul Jihad, Mufti Abdul Hannan, and Shahidul Alam Bipul were hanged in another case of terrorism.

Besides, Mohibul Mustakin and his brother Anisul Mursalin are now in Tihar Jail in India.

A total of 225 out of 511 prosecution witnesses gave their depositions before the court of Judge Shahed Nuruddin of the Dhaka Speedy Trial Tribunal-1 in the cases.