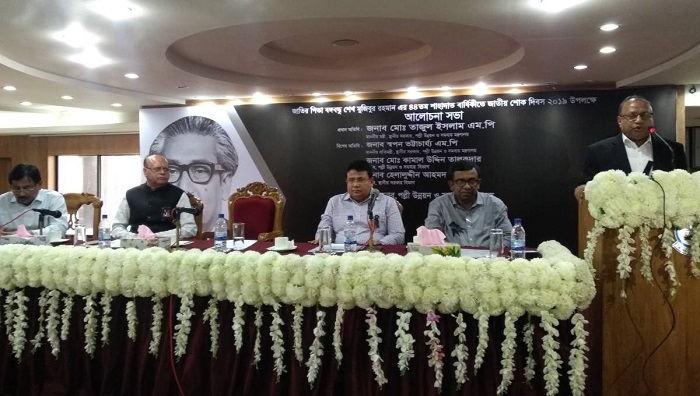 Tajul made the claim at a discussion at the auditorium of Public Health Engineering Department in the capital marking the 44th martyrdom anniversary of Bangabandhu.

He said Colonel Rashid, in an interview with a Libyan TV, recounted how he and Col Faruk met Ziaur Rahman. “Zia told them that ‘if you juniors want to do something, then do it. You won’t succeed if you involve us’. What else do we need as proof?” the minister said.

On August 15, 1975, the greatest Bangalee of all time Bangabandhu Sheikh Mujibur Rahman, along with most of his family members, was assassinated by a cabal of military men.

Tajul said Bangabandhu tried to overcome a wide variety of crises after independence and wanted to build a Sonar Bangla.

The LGRD Minister said Bangladesh has flourished in various fields under the leadership of Prime Minister Sheikh Hasina, the daughter of Bangabandhu.

He emphasised concerted efforts to build a corruption-free and clean country.