Sheikh Hasina’s Delhi visit to see signing of many documents 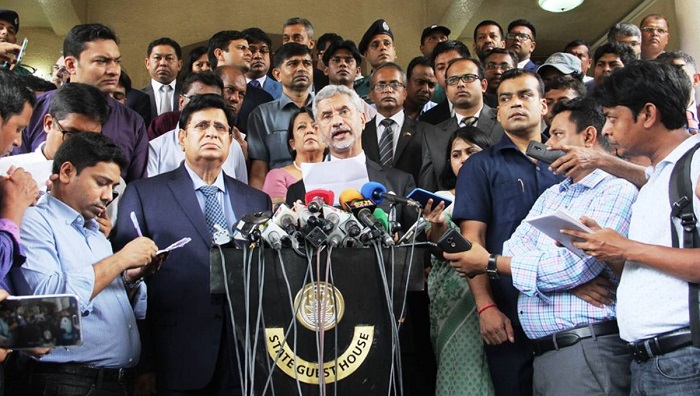 Bangladesh and India are preparing to sign a number of bilateral documents during Prime Minister Sheikh Hasina’s visit to India in the first week of October to further bolster their bilateral ties.

They discussed the preparatory measures over Prime Minister’s visit to India and exchanged proposals.

Sheikh Hasina will also attend India Economic Summit of the World Economic Forum with the theme ‘Innovating for India: Strengthening South Asia, Impacting the World’ to be held in New Delhi on October 3-4.

While talking to a small group of journalists, Dr Momen said they discussed issues related to finalisation of programme and agenda of the Prime Minister’s visit.

He said Bangladesh raised the issue of killings along the Bangladesh-India border during his meeting with the Indian External Affairs Minister. “We want zero death.”

Dr Momen said it (border killing) is still happening despite repeated commitments from the Indian side and they assured Bangladesh of looking into it.

At the beginning of the meeting, Dr Momen congratulated the visiting dignitary on his appointment as the External Affairs Minister of India and welcomed his first visit to Bangladesh in this capacity.

The two ministers reaffirmed that the relationship between India and Bangladesh, forged in the 1971 Liberation War, goes far beyond a strategic partnership.

Today it is anchored in history, culture, language and shared values of democracy, secularism, development cooperation and countless other commonalities, both countries recognised.

During the meeting, the ministers expressed satisfaction at the excellent state of bilateral ties existing between the two countries.

They reviewed ongoing cooperation including the implementation of decisions taken during the last meeting of the Joint Consultative Commission (JCC) in February 2019 in New Delhi, according to the Ministry of Foreign Affairs here.

They expressed satisfaction that both countries are working closer than ever before in every sector, from security and border management, including reducing untoward border incidents, to mutually-beneficial trade and investment, power and energy, river water sharing, including that of the Teesta, development partnership, transport connectivity, culture and consular issues.

They reviewed progress of the projects under the Indian Lines of Credit.

The two ministers expressed satisfaction that Bangladesh and India are enjoying traditionally close cooperation in multilateral and regional forums such as the UN, Commonwealth, BIMSTEC and others.