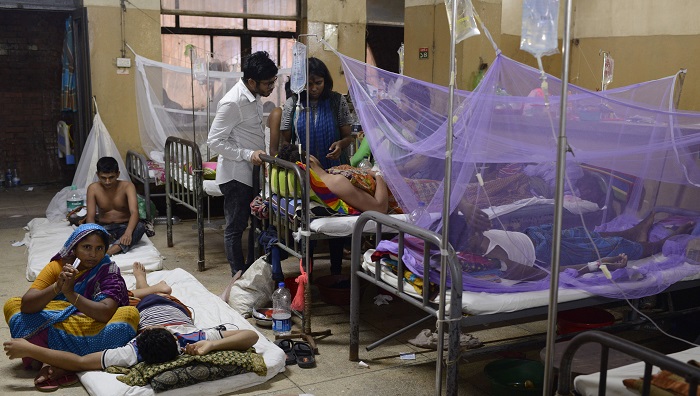 Two more dengue patients died in Keraniganj of Dhaka and Faridpur district on Monday night although there is a downtrend in fresh dengue cases across the country.

At least 1,572 patients were hospitalised in 24 hours till 8 am on Tuesday, while 56,369 patients infected with dengue are undergoing treatment at different hospitals across the country as of Tuesday.

Of the deceased, a rickshaw-puller identified as Shaheb Ali, 35, died in Faridpur district while a housewife, Fatema, 45 died at Mitford Hospital.

In Faridpur, Shaheb Ali of Matikanda in Sadar upazila of Rajbari district was admitted to Faridpur Medical College Hospital with fever on Monday, said Mahfuzur Rahman Bulu, an assistant director at the hospital.

Seven people have so far died of dengue at the hospital, he said

At least 70 people infected with dengue were admitted to the hospital in the last 24 hours, raising the number of dengue patients to 357.

Fatema, hailing from Bandar upazila in Narayanganj district, died at Mitford Hospital on Monday after being diagnosed with dengue.

Some 105 new patients with dengue fever were admitted to the hospital in the last 24 hours as of Tuesday while 81 people got released from the hospital after taking dengue treatment.

At least 1,572 patients were hospitalised in 24 hours till 8 am on Tuesday across the country, according to Health Emergency Operation Centre and Control Room of the Directorate General of Health Services (DGHS).

Meanwhile, the number of new infections at district level also declined in the last 24 hours from Monday’s 858 to 822 on Tuesday.

Currently, 6,470 dengue patients are undergoing treatment at different hospitals and clinics. Of them, 3, 413 are hospitalised in the capital and 3,057 around the country.