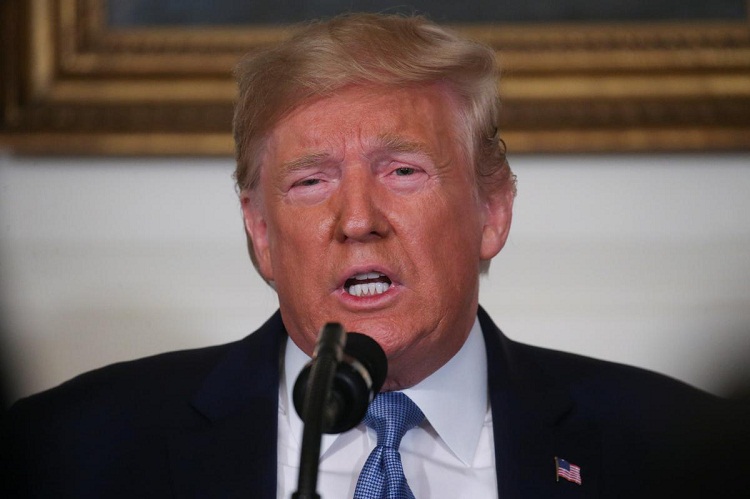 President Donald Trump said the U.S. is “doing very well with China, and talking!” but suggested he wasn’t ready to sign a trade deal, hours after his top economic adviser laid out a potential timeline for the resumption of substantive discussions with Beijing.

Trump vowed that the U.S. was “poised for big growth” after various trade deals are reached. But speaking to reporters as he departed New Jersey for Washington on Sunday, Trump said China needs a trade agreement more than the U.S. given the relatively weak condition of the Asian nation’s economy.

Trump made about 40 minutes of wide-ranging remarks after more than a week spent at his golf club in Bedminster, New Jersey.

The president tied trade negotiations with the ongoing situation in Hong Kong on-camera for the first time, saying that a deal between the U.S. and China would be harder if there’s a violent conclusion to protests there because of concerns raised by U.S. lawmakers. He tweeted last week that “of course China wants to make a deal. Let them work humanely with Hong Kong first!”

Trump also pushed back on media reports this weekend that the Commerce Department is poised, as soon as Monday, to renew Huawei Technologies Co.’s temporary general license to buy supplies for the U.S. “Huawei is a company that we may not do business with at all,” Trump said, calling the Chinese company a “national security threat.”

FedEx Corp. is in more trouble in China, after Fujian province started an investigation into a package containing a gun that the company delivered to a firm in China. FedEx was already under investigation after Huawei said it misdirected some packages, and China has been preparing to add the U.S. company to a blacklist of so-called unreliable entities, people familiar with the matter have said.

More teleconference meetings with Chinese negotiators are planned over the next week to 10 days, the White House National Economic Council director said on “Fox News Sunday.”

“If those deputies meetings pan out, as we hope they will, and we can have a substantive renewal of negotiations, then we are planning to have China come to the USA and meet with our principals to continue the negotiations and the talks,” Kudlow added.

Kudlow and Peter Navarro, Trump’s trade adviser, made multiple appearances on Sunday talk shows to discuss the economy and China trade prospects after a tumultuous week in financial markets that included an 800-point dip in the Dow Jones Industrial Average on Wednesday, its worst rout of the year.

The state of the economy is key to Trump’s re-election prospects in 2020; a downturn would dim the outlook for a president whose approval ratings have stayed stubbornly low. Major U.S. equity indexes, often referenced by Trump as a litmus test of his success, are essentially flat over the past 12 months.

“There’s no recession on the horizon,” Kudlow said on Fox. He added that there were no plans for additional fresh measures to boost the economy, and that the Trump administration would stay the course on its current agenda.

“Consumers are working, at higher wages,” Kudlow said on NBC’s “Meet the Press.” “They are spending at a rapid pace. They’re actually saving also while they’re spending -- that’s an ideal situation.”

Navarro, on ABC’s “This Week,” predicted “a strong economy through 2020 and beyond.”

On CNN, Navarro disputed that the U.S. had seen an inverted yield curve, often a forerunner of recession because it signals market expectations for weaker growth ahead.

“Technically we didn’t have a yield curve inversion,” he said on “State of the Union.” “All we’ve had is a flat yield curve.” And that, said Navarro, was “the result of a very strong Trump economy.”

As the stock market was tumbling on Wednesday, Trump lashed out at Federal Reserve Chairman Jerome Powell on Twitter, specifically citing the “CRAZY INVERTED YIELD CURVE.”