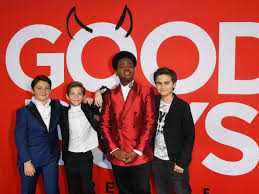 It was the first time an R-rated comedy had placed No. 1 since the same studio's Melissa McCarthy film "The Boss" in early 2016, according to Hollywood Reporter.

"Good Boys," produced by Seth Rogen and Evan Goldberg, follows three 12-year-olds -- played by Brady Noon, Jacob Tremblay and Keith L. Williams -- as they desperately try to get into a kissing party.

The three-day weekend was a good one for Universal, as last week's top movie "Fast & Furious Presents: Hobbs & Shaw" -- starring Dwayne "The Rock" Johnson and Jason Statham -- slipped just one spot from first to second, taking in $14 million.

And in fifth was Lionsgate's "Scary Stories to Tell in the Dark," at $10.1 million. Based on the children's horror books, it stars Zoe Colletti, Michael Garza and Gabriel Rush.

Rounding out the weekend's top 10 were: