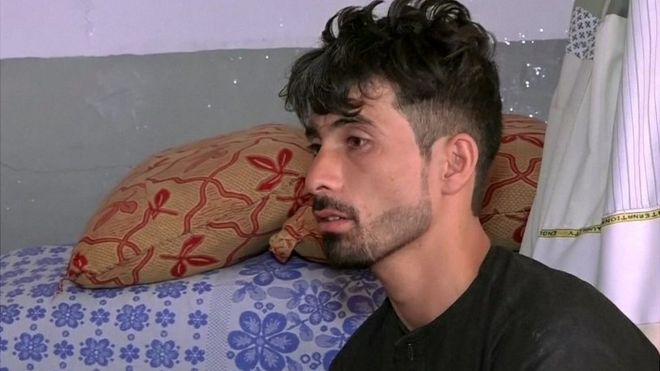 The bridegroom whose wedding was targeted by a suicide bomber in the Afghan capital Kabul says he has "lost hope" after the deadly attack.

In a TV interview, Mirwais Elmi said his bride survived but his brother and other relatives were among the 63 people killed in Saturday's attack.

The Islamic State group has admitted carrying out the bombing, which also wounded more than 180.

He blamed the Taliban for "providing a platform to terrorists". The Taliban, who are engaged in peace talks with the US, condemned the attack.

In the interview with Tolo News, Mirwais Elmi recalled greeting smiling guests in the packed wedding hall only to see their bodies carried out hours later.

"My family, my bride are in shock, they cannot even speak. My bride keeps fainting," he said.

"I've lost hope. I lost my brother, I lost my friends, I lost my relatives. I will never see happiness in my life again.

"I can't go to the funerals, I feel very weak ... I know that this won't be the last suffering for Afghans, the suffering will continue," he added.

The bride's father told Afghan media that 14 members of his family had died in the attack.

An IS statement said that one of its fighters blew himself up at a "large gathering" while others "detonated a parked explosives-laden vehicle" when emergency services arrived.

The attack took place in a district populated mainly by Shia Muslims.

Sunni Muslim militants, including the Taliban and the Islamic State group, have repeatedly targeted Shia Hazara minorities in Afghanistan and Pakistan.

Speaking from a hospital bed, wedding guest Munir Ahmad, 23, said his cousin was among the dead.

"The wedding guests were dancing and celebrating when the blast happened," he told AFP news agency.

"Following the explosion, there was total chaos. Everyone was screaming and crying for their loved ones."

Afghan weddings often take place in large halls where men are segregated from the women and children.

What reaction has there been?

Writing on Twitter, President Ghani said he had called a security meeting to "review and prevent such security lapses."

Afghanistan's chief executive, Abdullah Abdullah, described it as a "crime against humanity" and the US ambassador to Afghanistan, John Bass, called it an act of "extreme depravity".

A Taliban spokesman said the group "strongly condemned" the attack.

"There is no justification for such deliberate and brutal killings and targeting of women and children," Zabiullah Mujaheed said in a text message to the media.

How are Afghan peace talks progressing?

Taliban and US representatives have been holding talks in Qatar's capital, Doha, and both sides have reported progress.

On Sunday, US President Donald Trump told reporters in New Jersey that the negotiations were going well.

The US has about 14,000 troops in Afghanistan and is part of a Nato mission there. Since the start of his presidency Mr Trump has said he wants to pull the US troops out.

The deal would include a phased US troop pullout in exchange for Taliban guarantees that Afghanistan will not be used by extremist groups to attack US targets.

The Taliban would also begin negotiations with an Afghan delegation on a framework for peace including an eventual ceasefire. The militants have been refusing to negotiate with the Afghan government until a timetable for the US withdrawal is agreed upon.

The Taliban now control more territory than at any point since they were forced from power in 2001.