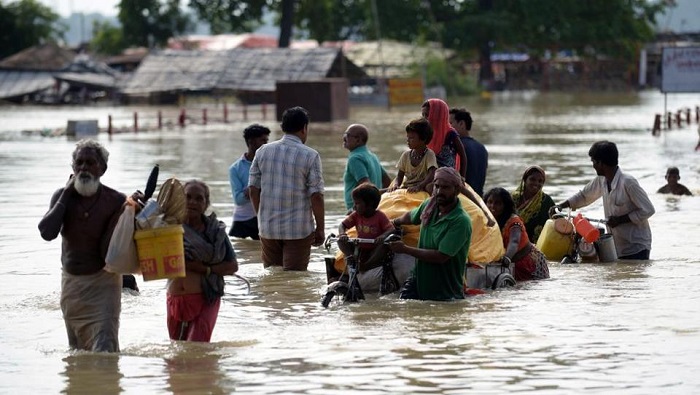 At least 30 people were killed and dozens reported missing or feared dead as relentless rains hammered north India causing widespread flooding, landslides, damage to roads and buildings even as flood alerts were sounded in Delhi, Haryana, Punjab and Uttar Pradesh as rivers, including the Yamuna, swelled to dangerous levels.

Majority of the damage was reported from the two worst-hit states — Himachal Pradesh and Uttarakhand — as heavy rains remained unabated through the Himalayan belt. Hundreds were stranded after incessant rainfall triggered landslides, snapped road links, led to shutting down of hydropower projects and release of excess water from dams in the region.

As of Sunday evening, rain-related incidents had claimed at least 23 lives in Himachal Pradesh, four in Uttarakhand while dozens were reported injured. In Punjab’s Aol village, three members of a family were killed when the roof of their house collapsed, police said.

The Delhi government on Sunday sounded a flood alert for the Capital and asked people living in low-lying areas to move to safer places as the water level in the Yamuna is expected to cross the danger mark (205.33 metres), officials said. The Yamuna was flowing at 203.37m on Sunday evening and is expected to touch 207m on Monday as 828,000 cusecs water was released from Haryana’s Hathini Kund barrage at 6pm, an official said.

Of the 15 wettest places in the world in the past 24 hours, 13 were in India, according to global weather monitoring website El Dorado Weather. The world’s wettest place was Diamond Harbour in West Bengal, which received 220mm of rainfall in the past 24 hours. Vellore with 188mm rain was ranked second, Jamshedpur third with 172mm, Shimla seventh with 146mm and Chandigarh was 11th in the global ranking with 121mm of rain.

In Himachal Pradesh, at least 23 people were reported killed and dozens wounded in the last 36 hours, state officials said on Sunday. At least nine people were killed in Shimla. Among the casualties, four of a family — a couple and their two teenage girls — died after they were hit by a landslide in Shimla.

The Indian Meteorological Department (IMD) office in Himachal Pradesh said on Sunday that the state received the highest ever rainfall for a 24-hour period, since records began almost 70 years ago. “The state as a whole received 102.5mm and this was 1,065% more than normal,” IMD said in a statement.

As many as 887 roads, including 13 national highways, across the state were blocked fully or partially due to landslides, officials said. Traffic on Chandigarh-Manali national highway was blocked near Bilaspur town, leaving hundreds stranded. Traffic from Mandi to Kullu was diverted as the highway along the swollen Beas river was inundated.

Meanwhile in Uttarakhand, at least 10 people were missing as heavy rains damaged 15 houses in the state’s Uttarkashi district even as four persons died and 20 others were rescued elsewhere, state’s disaster management officials said. Hundreds have been evacuated to higher reaches, state officials said adding that roads were damaged at many places, hampering rescue efforts.

With nearly 200mm rain in the past 24 hours, Uttarkashi district was the worst hit region in the state, with 10 people reported missing as cloudbursts wreaked havoc in several villages, damaging several houses in Arakot, Makuri and Tikochi villages. In other incidents, three persons died and two other were injured in three different accidents in Dehradun, Pauri Garhwal and Nainital districts respectively.

In Uttar Pradesh, several rivers, including Ganga, Yamuna and Ghaghra, are in spate. The Ganga is flowing above the danger mark in Badaun, Garhmukteshwar, Naraura and Farrukhabad. Heavy rains remained unabated in Haryana and Punjab on Sunday causing floods in some parts, while authorities sounded high alert.

In south India, ground-penetrating radars were put into use on Sunday to locate bodies at in Kerala’s Wayanad district, where massive landslides had wiped out two villages, even as a statewide calamity report on Sunday said 121 people have lost their lives in Kerala since August 8.

As of August 15, a total of 1,058 persons have died due to rain-related incidents during monsoon season that started on June 1 with one-fourth of the deaths reported from Maharashtra.